0
SHARES
322
VIEWS
Share on FacebookShare on TwitterShare via Email 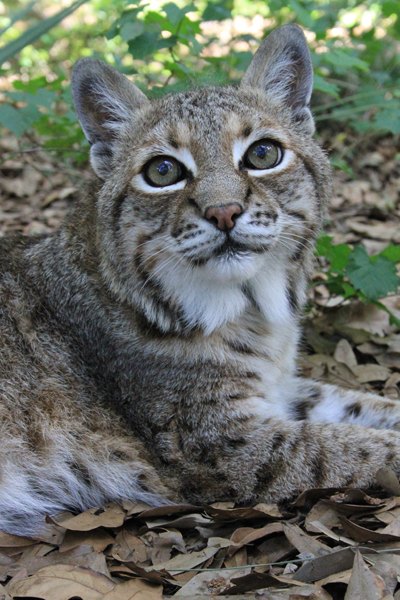 Little Feather was five days old when she came to Big Cat Rescue. She had been bred at a game farm that bred bobcats and cougars. Game farms often breed wild animals to be shot as game, or to be exploited in other awful ways.  One of the most common is one that you have probably seen.

If you have ever seen bobcat or lynx mothers with their kittens in a field of flowers, you have probably seen game farm cats.  Photographers will pay a lot for images they can’t get in the wild because no mother bobcat or lynx is going to let you get anywhere near her kittens.

The mothers are drugged, and wired down in place behind the flowers or log so you can’t see that their back legs are tightly secured to the ground.  The kittens are turned loose and they run to their mothers.  As she awakens, surrounded by photographers, she is terrified and gives them the hissing images they know will sell.

The photo session is concluded by the mother being darted again so that she can’t move.  This constant drugging destroys her kidneys and she will die young, but game farmers just consider that the cost of doing business.  Kittens who don’t look just right, or who grow too old are discarded as pets, to hunting ranches and other bad places.

Please, don’t buy books, calendars or other items with wildcat mom and kitten photos and don’t pass them around on social sites, unless you know that they were really taken in the wild or at a sanctuary that doesn’t buy, breed or sell wild animals.

When Little Feather arrived we began bottle feeding her, and she quickly became everyone’s little darling. Her surrogate mother was Breezy, a freebred domestic cat rescued from the streets.

Little Feather was very sickly as a kitten and spent days in a pouch around Carole Baskin’s neck to keep her warm and to monitor her every breath. She never grew to be very big for some unknown reason, and full grown she weighs only 16 pounds. 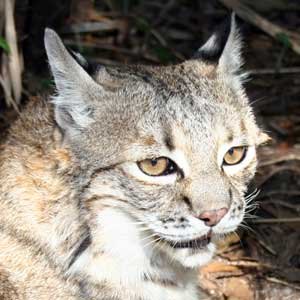 Little Feather is a very odd looking bobcat, she is stocky and has a fluffy coat like a northern bobcat, but has the dark coat pattern with small spots and her face has little ruff like a southern bobcat. She is likely a cross between the two.

She is now over 20 years old, but still just as cute as a kitten thanks to those huge eyes.

Due to blood clot, Little Feather has been lame in her back leg and has been receiving K-Laser Therapy three times a week thanks to K-Laser Veterinary.  She still limps a little, but the overall improvement has been amazing.  See the video below to show the progression from the time of lameness until her near recovery.

On June 24, 2016 Little Feather was brought into the West Boensch Cat Hospital as it was clear she was not dealing well with the heat.  Since she was pretty much toothless, and declawed on all four paws, and deaf and lame, we felt it was safe enough to allow her the run of the hospital.  She enjoyed the A/C, frequent grooming sessions, a wide array of food choices brought every few hours to her and her Cat Sitter DVD.  Our friends on explore.org and Facebook kept an eye on her via the Nest cams.  She seemed the picture of contentment, until today when her breathing became labored and she acted uncomfortable.

Dr. Justin came and tried to listen to her breathing with a stethoscope, but she was purring so loudly, that he couldn’t hear a thing.  We had pulled blood a few days ago, that showed her kidneys were continuing to deteriorate, but she had fought it and we did not get enough blood to do a full work up.  With her breathing hard, we knew we couldn’t risk traumatising her again, so we opted to sedate her to draw blood, and get a look in her mouth, at her last couple of teeth, and to do an Xray.

The Xrays were awful because there was something, like fluid, obscuring the view.  She appeared to have a mammary mass, but he just couldn’t tell without trying to pull off some of the fluids.  That proved to be a lot harder to do than expected, because the fluids were full of blood and clotting material that kept blocking up the needle.  We used the Ultrasound machine to try and target the larger pockets of fluids, but each area seemed to be more of a fibrous mass than just fluid.  Nothing we were going to do was going to fix that in a 23 year old bobcat, so we tearfully made the decision to help ease her over to the next realm.

We loved her and will miss her.

Here are a few pages that show the K-Laser therapy for Little Feather:

2014:  Little Feather is a 21 year old bobcat at Big Cat Rescue. She was reported for having a puffy looking chin, which turned out to be some bad teeth. The dental work went fine and she seemed to be well on her way to recovery, so we took her back to her Cat-a-Tat.

When we let her loose, we were horrified to see that she was lame. See how three vets, a number of techs, K-Laser and Big Cat Rescuers all came together to try and give her back the ability to walk.

See how you can help: http://bigcatrescue.org/cat-hospital-wishlist/

* This page has a short video clips of Little Feather enjoying being scratched: http://bigcatrescue.org/dont-they-miss-being-petted/

* Today At Big Cat Rescue for October 2, 2014 – This page has a lot of photos including Little Feather. http://bigcatrescue.org/now-big-cat-rescue-oct-2-2014/

* Today At Big Cat Rescue for November 12 – This page has several photos of the cats including photos of Little Feather: http://bigcatrescue.org/today-at-big-cat-rescue-nov-12/

* Now at Big Cat Rescue for July 29, 2014 is a video that has some footage of several cats including Little Feather: http://bigcatrescue.org/now-big-cat-rescue-july-29-2014/

* Now at Big Cat Rescue for June 22, 2014 is a video that has some footage of several cats including Little Feather: http://bigcatrescue.org/now-big-cat-rescue-june-22-2014/

* Today At Big Cat Rescue for September 16th – This page has a lot of photos including Little Feather: http://bigcatrescue.org/today-at-bug-cat-rescue-sept-16/

* Today At Big Cat Rescue for October 17, 2014 – This page has several photos of the cats including photos of Little Feather: http://bigcatrescue.org/now-big-cat-rescue-oct-17-2014/

* Walk About Video for May 3, 2014 has some footage of several cats as well as Little Feather –  Little Feather turns 21 and gets a doll house. http://bigcatrescue.org/now-big-cat-rescue-may-3-2014/

Sharon Dower Jul 19, 2016
Those eyes! Oh those wonderful eyes! We will never get to look into them again and witness the sweetness there. You will be greatly missed.

Regina Rinaldi Jul 6, 2016
Omg. I’m bawling my eyes out. My favorite bobcat for sure. Those eyes, that personality so sweet. She was so pampered and spoiled and I loved every minute of sitting on the ground, with every kind of meat we had in food prep, swatting mosquitoes, trying to get Feather to eat off a stick, and after 20 or 30 minutes, she would eat. I would be so happy, one time I jumped up and down. She walked away unfazed by this triumph. I love you Feather to the moon and back. Run free baby, say hi to Rainy for me will you? XOXOXOXO

Brittany Mira Jul 6, 2016
Lil feather you were the sweetest pampered princess on the entire property… I know you were so loved and will be missed so much by so many. I take comfort in knowing you are now with some many wonderful animals in a place you can finally be free!

Little Feather, soft and sweet,
Seeing her is such a treat.
Giant eyes and square-shaped head,
Fluffy, softer than a bed.

Rescued only five days old
From the cruel humans’ hold.
Now she lives in luxury,
Next best thing to running free.

She’ll look up with shining eyes,
Don’t let it be a surprise,
You will wish to give this cat
Just one little loving pat.

She could never hurt you, right?
She can’t even scratch or bite.
Clawless, toothless, senile, lame,
Don’t you ever think she’s tame.

Wild through her veins will roar,
Truly Wild to the core.
Never treat her like a pet,
That will only bring regret.

Just admire from afar,
Little Feather, bobcat star.
You will surely fall in love
With this cutie bobcat dove.

Little Feather’s precious heart
Will arrest you from the start.
If you don’t watch out she’ll pull
You into her perfect soul.
Sharon Henry Jul 6, 2016
You were our little Angel, the sweetest little soul on property. Things will never be the same around here without you. While our hearts are heavy, I believe Heaven is rejoicing as they welcome home a very special angel. Until we meet again our sweetest little girl…we will always love you.

Marie Schoubert Jul 6, 2016
Goodbye to our little sister, our sweetest girl, sweetest face I’ve ever known and loved! We will never forget you but we will always miss you. R.I.P. little princess. Love you FOREVER!!!

Carole Baskin Jul 5, 2016
Regrets. I knew I would have them. I’ve known for 23 years, but now that is mostly what I feel. When Little Feather first arrived and was so sick, I had to carry her in a pouch in my shirt because I still had to work. I had to run a real estate business, care for a husband suffering from Alzheimers, and care for more than 60 other exotic cats who had been rescued from fur farms and taxidermists. Jamie was only 13 and was the most help I had. It would be three more years before my family would join us in this endeavor. I adored Little Feather and wanted so much just to enjoy her kittenhood, to spend time with her, and others, like Windsong, Raindance, Hercules and Catera, but was always being pulled in so many directions that I never had that luxury. I always knew I would regret it. I knew I’d wake up one day and that opportunity would be lost forever. I tried to spend time with each of them, and all of the others that I loved in each and individual ways, but it was never enough. The phone would ring, a text would arrive, some other cat would need assistance and the time was always cut short.

Today as I saw Jamie struggling to deal with the loss of a sister, a child to her, a constant in her life for all of her teens and adulthood, I took it to heart that I need to make more time for those I love because I don’t want to regret a minute of my life that wasn’t spent showing that I love them.