0
SHARES
603
VIEWS
Share on FacebookShare on TwitterShare via Email

Based in Tampa, Florida, Big Cat Rescue is one of the world’s most influential wild cat sanctuaries. It houses nearly 150 lions, tigers, leopards, cougars, servals, caracals, and sand cats. 16 of the 35 species of exotic cat are represented at the sanctuary.

The 55-acre sanctuary is a permanent home to many cats that have “retired” from the animal entertainment industry. Many other wild cats have been rescued from death, fur farms, roadside zoos or, unbelievably, from the backyard cages of people who tried to keep the cats as pets.

Each enclosure within the sanctuary provides a natural habitat with foliage and shelter. The cats receive nutritional and medical care, as well as operant conditioning to improve the cats’ well being.

Dr. Kevin Murdock, former Florida Association for Behavior Analysis (FABA) President, has visited Big Cat Rescue. He graciously offered his knowledge and expertise on the subject: “Operant conditioning techniques have long been employed to teach animals to perform in circuses, carnivals, and theme parks for the benefit (i.e., entertainment) of human visitors.  There has been an increasing trend in the use of operant techniques for the benefit of the animals…. The cats’ target behaviors are not “trick” behaviors to entertain humans. The cats’ target behaviors are primarily for reducing stress associated with routine care, animal husbandry, grooming, veterinary care, and transportation… Problem behaviors include reaching outside of enclosures for treats and various forms of aggression toward food or staff.” Jennifer Ruszczyk (pictured here) is Big Cat Rescue’s Secretary/Treasurer as well as a member of both the Board of Directors and the Volunteer Committee.

I had the privilege of corresponding with Jennifer this winter. Jennifer first learned about Skinner in a Psychology 101 class in college. It wasn’t until attending a Clicker Expo in San Diego, however, that Jennifer really began to understand Skinnerian science and Operant Conditioning.

Jennifer had always wanted to work with animals, and had spent time volunteering at her local zoo. However, she felt the need to be more directly involved in “saving the planet.” After visiting Big Cat Rescue, Jennifer became a volunteer. She has been working there for 8.5 years now and is confident in the positive effects of her work there.

Jennifer mentioned the impact of Karen Pryor, B.F. Skinner Foundation Board Member, and her Clicker Training programs. “Karen Pryor’s Clicker Training program was life-changing. At that program, I met so many people that were doing so many different things with animals. I met trainers at the local zoo, rescue dogs, agility dogs, horse trainers, shelter workers… I was amazed at how everything the conference speakers said made so much sense. It was really like a light bulb went on.” Jennifer went on to say that, “[Big Cat Rescue’s] biggest challenge is not really training the animals, but training our staff and volunteers. After the conference, things just seemed to fall into place. That conference really helped us put our current program together.” Dr. Kevin Murdock explains the clicker training process at Big Cat Rescue: “The operant techniques employ the “clicker” to audibly signal the correct behavior the cat was doing at a point in time. The click is immediately followed by an edible treat delivered via a 2-3 foot stick. The click soon becomes a conditioned reinforcer. The cats are reinforced for incremental improvements in target behaviors. The cats are often initially afraid of humans and must be taught to approach the side of the cage when called, and to stay while being visually examined. Later, the cats are taught to respond to (stand) “up,” (lay) “down,” (show) “paw,” and “open” (mouth). Other learned skills are tolerating the presence of multiple staff while receiving topical sprays, injections, and needles for blood samples. Problem behaviors like reaching a paw through the cage and other aggressive behaviors toward food or staff are treated by simply ending the session and moving away.”

According to Jennifer, it is difficult to say how long it typically takes to train an animal at Big Cat Rescue. Jennifer explained, “It depends on the animal and its past. The majority of our animals don’t come to the sanctuary as cubs. Some come with past training and many come with a lot of ‘baggage.’ In the early stages of our program, the animals took up to 3 months to become familiarized with the clicker. Now the training goes much faster because the animals are watching what is going with the others. I really feel that they learn a lot from just watching other training sessions.” Is one type of cat typically easier to train than others? Jennifer is partial to leopards, and while admitting her opinion might therefore be biased, she feels they are the most easily trained.

Big Cat Rescue has a very strict program for training. There are four levels in which the animals and trainers are grouped:

Level 1: Click and treat. No talking, and no commands. The objective is to make the animal and volunteer familiar with the timing of the bridge and reward.
Level 2: The introduction of a few basic, yet beneficial, commands.
Level 3: More commands are introduced, and the animals are trained in front of groups of people. (Here, more experienced trainers can observe the newer trainers.)
Level 4: Includes the quarantine animals as well as very aggressive animals. Big Cat Rescue Staff are the only people allowed to work with these animals. Few people working at Big Cat Rescue are in the behavioral science field. Jennifer explains, “The people working with our animals are just everyday people with really big hearts.”

When asked about the future of Skinnerian science, especially in its relation to the training of animals, Jennifer is optimistic. She feels that people are changing their views regarding the training of animals. “There are more and more people using treats and verbal rewards rather than punishment techniques,” said Jennifer. At Big Cat Rescue, a special tour is given where visitors can see how the animals are trained. Positive reinforcement and operant conditioning techniques are explained and discussed. “Visitors really respond to this tour,” said Jennifer. One of the ways Big Cat Rescue staff explain the training process to their guests is by saying, “How do you put a pill in a 850 lb tiger’s mouth? You can’t open his mouth and force him to swallow it. We will show you how to do this, and the tiger will even come running up to you for their medication.” According to Jennifer, “This usually gets our guests thinking and asking lots of questions!”

This non-profit sanctuary receives no government funding and relies on its volunteer staff, admission fees, and the generosity of individual donors. More information about clicker training is available at www.ClickerTraining.com. 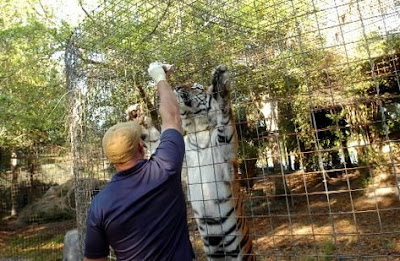 One response to “Operant Conditioning at Big Cat Rescue”