Priya was born at Big Cats of Serenity Springs on 12/20/03 and had 4 cubs by Charaka Tiger on 3/14/10 while still at Serenity Springs.  Charaka was neutered a year later and it is unknown how many cubs they may have had before this known litter, or if she was bred to other males after Charaka was fixed.  There was considerable overcrowding at the tiger breeding mill, and Charaka may have been neutered to try and prevent him from fighting with new males who were housed with them.

Priya and Charaka had been used as breeding stock for the pay to play schemes at Big Cats of Serenity Springs and elsewhere.  Cubs were frequently transferred both in and out to GW Zoo, Jungle Safari AKA The Zoo, Wildlife in Need, Dirk Arthur’s magic act, Tanganyika Wildlife Park, Hanson Exotics, T.I.G.E.R.S., and others.

Read this in-depth investigation done by Tigers in America and the International Fund for Animal Welfare about Priya and Charaka before they arrived here.

The day after her arrival she was rushed into the onsite Windsong Memorial Hospital to be evaluated by Dr. Justin Boorstein, Dr. Liz Wynn, Dr. Tammy Miller, and Dr. Bard.  Priya was sedated and examined due to her extended belly, inappetence, crankiness and inability to lay comfortably on her side without a back leg sticking straight out in the air.

The vets did X-rays and then exploratory surgery and said it was a hydrometra.  Here’s what I could find in laymen’s terms to describe what that is:

This is an accumulation of fluid in the womb, caused by inflammation and constitutional debility. During the first months, the symptoms resemble those of pregnancy; but by touching the neck of the womb, and pressing the tumor, fluctuation of fluids is felt. The menses are usually suppressed, and general debility will appear if the disease continues. The patient may die from exhaustion, or the walls of the womb may be ruptured from the pressure of the fluid, causing fatal peritonitis.

Priya was fortunate to be one of the early cats to be moved out of Serenity Springs to a facility that was capable of discerning her distress and acting quickly.  You can all be proud to have been part of the team who saved her life. Everyone and their mother is going to ask if they will be put back together and that depends on what the cats want.  If they want to share space, we will accommodate them but big cats are solitary and usually, don’t want to be housed together.  It’s only done at breeding facilities, for obvious reasons, and at zoos to cater to the public’s desire to see animals in pairs or groups, even though it goes against their nature.  Find out more at http://bigcatrescue.org/solitary/

Priya Tiger is back out in the wooden deck section near tigers and is eating and taking her meds.  She seems calm and we are cautiously optimistic for a full recovery.

Cats are amazing!  Their ability to heal themselves, and others, is beyond compare.  Priya Tigress arrived with a 20 lb infection in her uterine horns and we removed it the next day, but her infection was resistant to the array of antibiotics we tried.  Her body was so seeped in the bacteria that her stitches could not hold and she had to undergo surgery again to seal the wound.  Meanwhile, the bacteria were cultured and we found a better antibiotic for it and began treatment.

Priya did better, and we thought she was healing because she was no longer seeping from the incision and her appetite and temperament improved immensely.  However, a week before she was to be released back to her earthen floored enclosure, keepers noted a pink slit in the stitches.  Due to her baggy belly folding on either side of the gap, it was hard to get a photo of it to see the extent.  Priya seemed to be getting more and more uncomfortable and began to refuse food unless coaxed extensively.

I noticed a change in her sleeping habits.  She began to sleep on her back, with legs splayed wide.  It gave me a better opportunity to get a photo of the opening incision, which led our vet team to decide that surgery was again needed to close the wound.  What I didn’t know at the time was Priya’s wisdom in dealing with her own injury.

We went into surgery thinking it would be a minor issue of putting in a couple of stitches to close the gap again, but what Dr. Justin Boorstein saw, made him say that her prognosis of survival was not good.  He was clearly distressed when he saw that the tissues had separated to the point that air was seeping into the open layer between her skin and her muscle.  When he invited me to touch her skin and feel the crackling of it, as the air was compressed beneath my touch, I was horrified.  I’d never felt anything so foreign to the feel of a sleekly muscled and furred cat.

The air, and any impurity in it was filling her body and making it even harder for the antibiotics to work; making it harder for Priya to call on her own immune system to heal.  Then it dawned on me that she was laying on her back to try and force the air back out, through the hole in her belly where it had entered.  There was no other way out.  Standing, sitting or laying in a normal cat load style would not help her express the air that was building up under her skin and causing her so much discomfort.  How amazing!

The surgery lasted about an hour and a half and by the end, Dr. Boorstein was somewhat more encouraged that she may survive.  During the first repair, the week or so after her original surgery, he could reach his arms into the gap up to his elbows.  Now he could only reach into his wrists.  She was healing, but ever so slowly.  He also found the tissue to be healthier than he had expected, so there is a good reason to think it can bond fully this time.  Only time will tell, but thanks to our expert vets, on-site hospital, excellent equipment and the loving care of the volunteers, Priya has a good chance of living a long healthy life at Big Cat Rescue.

In reviewing inventory records, Kiz found these relationships: Priya, Tutt, Nefertiti, and Pandora were littermates, born 12/20/2003 on site. Priya is now at Big Cat Rescue, Titi is at Black Pine Animal Rescue, Pandora is at The Wildcat Sanctuary and Tutt is at the Performing Animal Welfare Society. 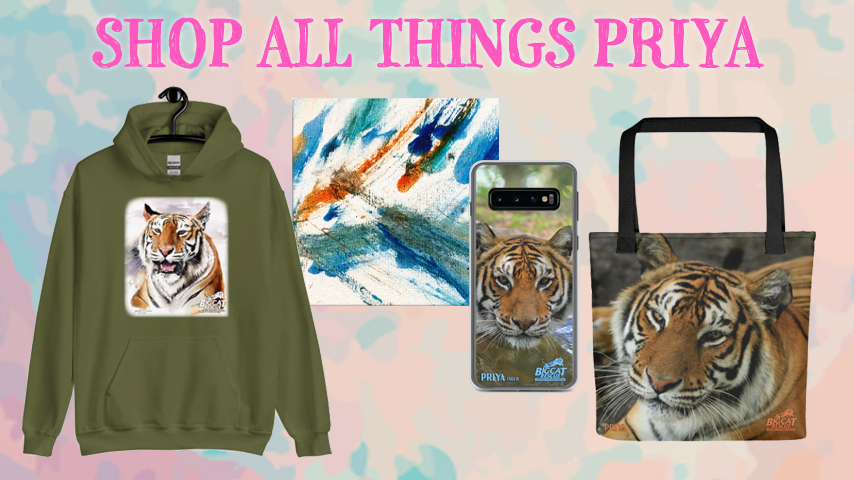