0
SHARES
419
VIEWS
Share on FacebookShare on TwitterShare via Email Sabre was 3 years old when he arrived at Big Cat Rescue on 7/20/95. Though he was only supposed to be here temporarily, his former owner moved and left no forwarding address.

This could have been another sad ending as most are in the exotic pet world. Luckily, we had taken Sabre in and he will have a home here for life. He is very playful and fun loving and always has a mischievous look on his face. He loves to act very silly, running about his cat-a-tat and jumping on top of his mountain den. 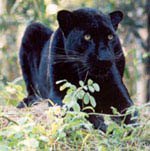 Sabre, like many of our cats, has been relocated to new cat-a-tats a few times.  The change of scenery and new neighbors to interact with provide another form of enrichment for our big cats.  Sabre has enjoyed the time he has spent among other cougars, tigers, leopards and bobcats.  The only thing Sabre probably hasn’t enjoyed is his recent neutering.  But now he is back to his old energetic self loving his new location.

Why isn’t this cat called a Black Panther?

Sabre the black leopard is 22 years old, which is about 10 years longer than most leopards live, but a tumor has begun to grow under his chin and could make it hard for him to swallow, so the difficult decision is made to remove the mass surgically.  The surgery could kill him, but the mass could too.  This is graphic surgery video so don’t watch if you have a weak constitution.

Last night (7/15/17) Sabre was brought into the Cat Hospital because he had gotten over heated and was having difficulty moving into the shade on his own.  He was given 2000 units of fluids last night.

This morning (7/16/17) Sabre refused meds, refused to eat, and was given another 2000 units of sub q fluids.  His breathing became more labored and the vets were called in.  Dr. Justin euthanized Sabre because there was no possibility of him getting any better and Sabre was clearly ready to go.

As the vet was shaving him to administer the euthanasia, he found that Sabre was literally covered in tiny masses that were not visible through his plush fur.  You may remember that 3 years ago we had to remove a huge tumor by his trachea that was threatening to kill him.  Sabre got another good three years after that life saving surgery, but as yet nothing halts the ravages of time.  Sabre was 25 years old and the oldest leopard to ever live from what I have been able to gather on the Internet and Guinness.  We had applied to the Guinness Book of World Records but never heard back from them. Sabre was roughly the equivalent of a 150 year old human.

We are the most open and transparent sanctuary that has ever existed.  We take you LIVE behind the scenes here every day and when there is an emergency, we film it (if we have extra hands at the moment) and share it with you right away.  We have LIVE cameras in our surgery suite and our recovery rooms, so that the people who love these cats from afar can help us keep an eye on the cats.  We do it at considerable hassle to ourselves, because the people who want to make a living pimping out cubs, constantly take little bits of truth and twist it into horrible lies that they spread to their minions and to government agencies, for the sole purpose of harassing us.

One thing we don’t do is invite the world in to watch a cat being euthanized.  Maybe someday that will change but for now our vets and keepers feel that it is just too difficult a moment in their lives to have everyone being an armchair critic. The rest of the criticism is hard enough, like “why aren’t they wearing gloves?” or “what is everyone waiting on?” etc. The list is endless. The second we turn off the LIVE webcam our phones and emails blow up with people wanting to be the first to know if we euthanized the cat.  Please! Give us a minute to deal with the loss of someone we’ve probably spent decades loving.  Give us a few minutes to let their keepers know, so that they have some time to process the loss.  As soon as one of us can see through the tears to bring the rest of the world up to date, we will. Whether you have known us for a week or twenty five years, you know that we always go public when a cat dies. We really appreciate that you love these cats too and we will tell you all about it, as soon as we possibly can.

Pressing us for gory details is really hurtful as well.  When we do post about such a loss we do so as thoroughly as possible without having to force those who were there to constantly be re reading the details online as the story spreads.  One sad thing I noticed, from decades of sending out digital newsletters is that the stories about cats dying are always the one with the most click thru traffic.  I only wish that the masses were so eager to take action to protect big cats from being bred for life in prison in the first place.

None of the cats we have loved and lost has to have died in vain if it inspires people to take action on their behalf.  Now would be a good time to make the Call of the Wild for Sabre again at BigCatAct.com

What you don’t see usually, if you are watching from afar, is how difficult it is to keep doing whatever we are doing.  When Aspen Echo died there were Feeding Tour, Enrichment Tour and Private Tour guests all expecting to have a wonderful experience.  Today, it was the same, but just more people all waiting for their once in a lifetime experience.  All of the volunteers, interns and staff were still in shock and dealing with everything that goes along with the end of the cats’ lives, like calling the pet funeral home to come get the cat for cremation, cleaning out the cage for the last time, putting away the favorite toys, and having to do all of it with guests on site.

It’s kind of like having to put on that cocktail party you invited a boatload of people to on the day you had to say goodbye to your pet.  You can’t just drop to your knees and wail at the top of your voice because of the grief that overcomes you, because you don’t want to freak people out or ruin their day.

As we go about our jobs, we have to be pleasant to visitors, and careful not to cause our fellow rescuers to lose it.  We have to be cheerful and talk about all of the fun aspects of the cats’ lives here, while we are dying inside. Some of us who go LIVE will have to deal with well intentioned people asking us for days or weeks on end about the cat who has passed, or telling us how much they care.  It’s all meant in a loving way, but makes it nearly impossible for us to stay focused on trying to create a good experience for the thousands of people on the LIVE feed who didn’t know the cat.

Sorry for the rant.  I guess I’m a little emotional right now.  I just want you to understand why we do what we do and why we usually do not respond to people telling us how sorry they are for our loss.  We don’t mean to be rude.  We just have to keep on doing what we do if the suffering is ever going to end for the cats.

You can post your tributes at the bottom of this page.

You can get a FREE Hi-Resolution 8×10 version of this photo, without our URL on it, that you can print to remember our precious Sabre.