0
SHARES
846
VIEWS
Share on FacebookShare on TwitterShare via Email

At Big Cat Rescue we have a general  decision tree that we and our vets use to determine when it is time to euthanize a big cat, but every situation is different. The vast majority of the time we just aren’t sure that it is the right decision until we do the necropsy, which is the animal version of an autopsy.  The reason it is so hard to know, if we are doing the right thing, is because cats are hard wired to live the mantra of the wild; “Survival of the fittest.”

They just will not reveal their illness or their suffering until they cannot hide it any longer. We just had two situations, back to back, where we had to make the gut wrenching decision to euthanize an exotic cat.

One was an ocelot (known in Central and South America as the Tree Tiger) and the other was an actual tiger.  Both were 20-22 years old, but their histories were so different, that the decision in each case came after painful deliberation of our veterinary care team. 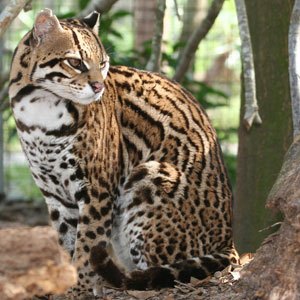 Amazing Grace the ocelot was 22 years old and had been with us since 1996.  She had always been robust in health and purr-sonality and had been a favorite of Keepers and Guests alike.  We knew Gracie’s moods, what she liked and didn’t like to eat, how to get her to relax when her hyperactivity was getting the best of her and what her favorite enrichment treats were.

When Amazing Grace came up on the Observation Chart for NOT being excited about dinner, and yet looking bloated, we knew something was wrong and scheduled a visit with our vet, Dr. Wynn. Sedating a 22 year old cat is not something we would do without considerable cause, but Amazing Grace was in excellent condition and there wasn’t anything we could determine about her failing to eat from just looking at her.

When she was sedated it was discovered, via blood work and being able to get our hands on her, that her kidneys were done and she had several tumors.  The bloating was from fluid filling her abdomen, which is usually a sign of a failing heart.  At 22 we did not believe that she had any chance for improvement and had to say, “Good-bye” to our precious, long time friend.

Her necropsy gave us the peace of mind that we had done the right thing for her.  It revealed that she did, in fact, have liver cancer, advanced heart disease, many other masses throughout her organs and a tiny, blister – like surface over her entire omentum (the tissue that envelopes your organs).

The second situation was even harder to make because Kimba the tiger had just been rescued 17 days before we had to make a life or death decision.  We knew almost nothing about Kimba, except that she was literally starving to death in NY and that we weren’t even sure she would make it through the day that we loaded her into a transport and gave her food and water for the first time in who knows how long.

She and her two family members were all starving and dehydrated and drank 8 gallons of water between them in the first 24 hours. As soon as they arrived at Big Cat Rescue we began offering food and Zeus ate like there was no tomorrow, but Keisha and Kimba were shy about it, so we couldn’t be sure if they were coming into the feeding area at night.

Within a few days, Keisha overcame her shyness and would eat while Keepers were present, but Kimba was still not packing away the chow like the other two.  We weren’t sure if she was just more shy, or if she had been starved for so long that she just couldn’t eat as much at any given time, so we started feeding her several times a day.  She would eat a couple bites, off a long stick, but then no more.  She was seen drinking regularly, so we just did all we could to increase her food intake, in the hopes that we could build up her strength enough to sedate her and look for anything else that may be going on.

Maybe she had bad teeth and eating was painful?  Maybe she had tumors or an obstruction that was keeping her from eating?  Maybe she had some disease?  Some things you just can’t tell by looking at a tiger, no matter how well trained your eyes.

We had noticed that she was missing much of the fur from around her rump, and thought it was from sitting in her own feces in her den in New York, which was the only place she could site that wasn’t on rocks.

We wondered if the heat was too much for her, even though she had a pool and the day we rescued her it was the same temp as what we have down here.  We have overhead sprinklers and turned those on for her.

Kimba seemed happy.  She would walk around, climb up and lounge on her platforms over looking the lake and would sleep the day away, like most tigers her age do, but she just wasn’t eating enough to improve her condition any, so we had to make the scary decision to sedate a very ill, 20 year old tiger.

More about that here: http://bigcatrescue.org/now-big-cat-rescue-june-11-2014/

Her exam showed that her teeth were fine and there weren’t any palpable tumors or obstructions but her blood work showed that she had a urinary tract infection and that her kidneys were in failure.  Sometimes a UTI can make kidney values worse than they really are, so we began treatment for the UTI with antibiotics and fluids.  At her advanced age, if there was any chance of turning this around, she had to get injections twice a day and 5 liters of fluids. 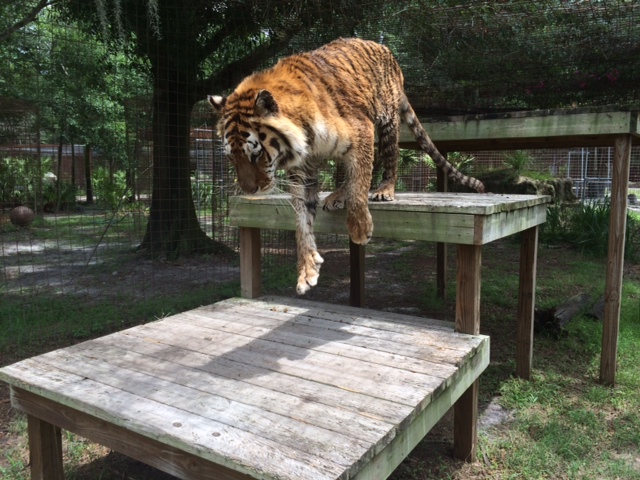 To do that we had to keep her in a transport wagon in the Cat Hospital and that worked for a couple of days because Kimba didn’t feel good enough to try and get away from us as we tended to her feeding, watering, brushing out the dense and dead Siberian coat (with a long handled back scratcher), and washing her down with the hose to keep her cool and clean.

She would let us get about 3 liters of fluids in her before objecting and moving away and that isn’t something you can force a tiger to endure. Repeated sedation would kill her for sure and add to the toxicity that her kidneys were trying to purify as well.

Since close confinement wasn’t working so well, and she seemed to be in better spirits, we decided to let her back into her yard in the hopes that she would drink enough on her own and yet still come to the side of the cage to get her meds, either in her food, or via injection.

Her first day back outside she was SO happy!  You can see her pouncing around on her platforms here:  http://bigcatrescue.org/now-big-cat-rescue-june-12-2014/

But she wouldn’t take the meds in food and wouldn’t come to the side of the cage to be injected.  We still had to get them in her though and had to dart her with the antibiotics to ensure she was getting them.

She hated that and began hiding in her den and just growling when anyone approached.  We set up trail cams to see if she was getting up to eat or drink and she wasn’t doing enough of either to survive.  Her condition was worsening and she now had gone more than a day without eating at all.

So our choices were to sedate her yet again, put her back in the transport wagon in the Cat Hospital, keep injecting her twice a day with antibiotics and keep trying to give her fluids, when she was pulling away from us after only getting a tenth of what she needed and hope for a miracle, OR let her go to sleep peacefully in the one place where she had found happiness, however brief, where she could be surrounded by her tiger family and let her last moments be that of drifting off to sleep, in the shade of her beloved platforms, while gazing out over the lake?

Along with our vets we weighed the pros and cons and decided that Kimba had overcome death for the past couple of weeks through little more than her strong will and now that she was giving up it should be on her terms in a setting that she chose.

It took us several hours and many tears to make that decision, but her necropsy showed that it was the right one for Kimba; no matter how hard it had been for us.

Four days after making the decision to euthanize Kimba we got the lab reports back and they showed that Kimba’s UTI was complicated by E. coli, from the filthy conditions she was forced to live in, and that the drug we were using was the best drug for her infection. That both broke our hearts, because Kimba wouldn’t have been so ill if her former owner had just cared enough to keep her cage clean, and gave us some peace in knowing that we were doing all that was medically possible for Kimba, and that if she had not responded to the drugs by now, she wasn’t going to.

86 responses to “When to Euthanize a Tiger”