0
SHARES
4.2k
VIEWS
Share on FacebookShare on TwitterShare via Email

A  pet Serval was confined to a tiny, two room apartment for the past 10 years. She was housed with a domestic cat, presumably for the purpose of breeding Savannah Cats which can fetch as much as $26,000. Her life was about as boring as can be imagined since she had to be kept secreted away from the world, but all of that was about to change.

Her owner was so ill that she needed intensive hospital care, but having no relatives and no one she could turn to, it was up to the authorities to have her Baker acted for her own good. Imagine the hysteria involved in being so incapable of making your own decisions that the police and paramedics had to be called to carry you to the hospital.

It was worrisome for the authorities as well because this woman’s neighbors all whispered that she kept a lion in that apartment. The lion turned out to be a Serval, but none the less, it left animal control in a strained situation. It is not expected that the owner will live and county law there gives Animal Control ownership and custody of animals who are not claimed within 10 days. They knew that it would be torturous to take a wild cat into a shelter full of barking dogs. They didn’t know who to call about placing a wild cat.

On the one hand, they found the cat in a house and originally thought that maybe they should seek out an exotic pet owner to take the cat, but as they interviewed candidates it became clear that no one had the cat’s best interest at heart, but rather were just looking for the novelty of owning an exotic pet. They investigated some exotic animal sanctuaries, but were dismayed by the over crowded cages full of pacing animals.

They asked a local vet for advice and he found Big Cat Rescue. After researching our facility and doing an interview with Big Cat staff, they knew that Big Cat Rescue was the purr=fect place for this Serval to go. The thought of this Serval having her own Cat-a-tat, her own den, her own trees and shrubs and grass and all of the wonder of the little creatures that she will be able to see and sniff and chase…it was just as good as it gets if you have to be held captive. (Being captive bred and born, she could never be returned to the wilds of Africa.) This Serval had been through enough and they wanted a place that was stable, reputable and that would provide a permanent home.

This is where you come in.

A Cat-a-tat for her will cost $1,500 and her ongoing care, for food, toys, vitamins, vaccines and vet care is roughly $500. per year. Your help now makes it possible for her to have a forever home.

If you have been following us in the AdvoCat you know that Cloe the Snow Leopard just had a very expensive procedure done to save her life. Veterinarians, Liz Wynn, Allyson Berent, Chick Weisse, and Haven Bade from the Animal Medical Center in NYC, and Demetrius Bagley MD donated their time and Bay Area Renal Stone Center donated the equipment but Big Cat Rescue had to pay for airfare, car rentals, food and lodging for the vets and that bill just came to $2,614.78.

Your ongoing donations make it possible for us to race to the rescue of cats like this Serval. We can’t do it without you. Please sponsor Servie Serval here:  http://big-cat-rescue.myshopify.com/collections/sponsor-a-cat

2/11/2022 Jamie posted to our 102 Big Cat Rescuers: Sadly, we had to say goodby to Servie this morning. Servie has not been feeling well, has been vomiting foam and her appetite has steadily decreased. She lost 6 pounds since her last vet exam in October when she had a cancerous mass removed from her nose. Servie’s bloodwork today showed end stage kidney failure and liver disease. The decision to euthanize her while under sedation was made and Dr. Justin helped ease her out of her failing body and on to her next adventure. Servie was 22 years old. Servie’s last morning with us was spent snuggled in her hay in the den facing the lake basking in the sun and watching the ducks on the lake. 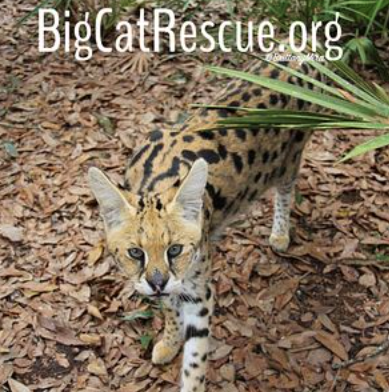 Servie Serval gets medication twice a day to combat a mosquito allergy and queasy stomach, as well as a supplement to improve kidney function. Here she is patiently waiting on her treats!

Servie was taken to Ehrlich today to be seen by Dr. Wynn in regards to the bump on her nose. What looks to be a mass was removed and sent out for a biopsy. She stitched her nose shut to prevent bleeding. She was brought back to the recovery hospital and will remain in there for two weeks. 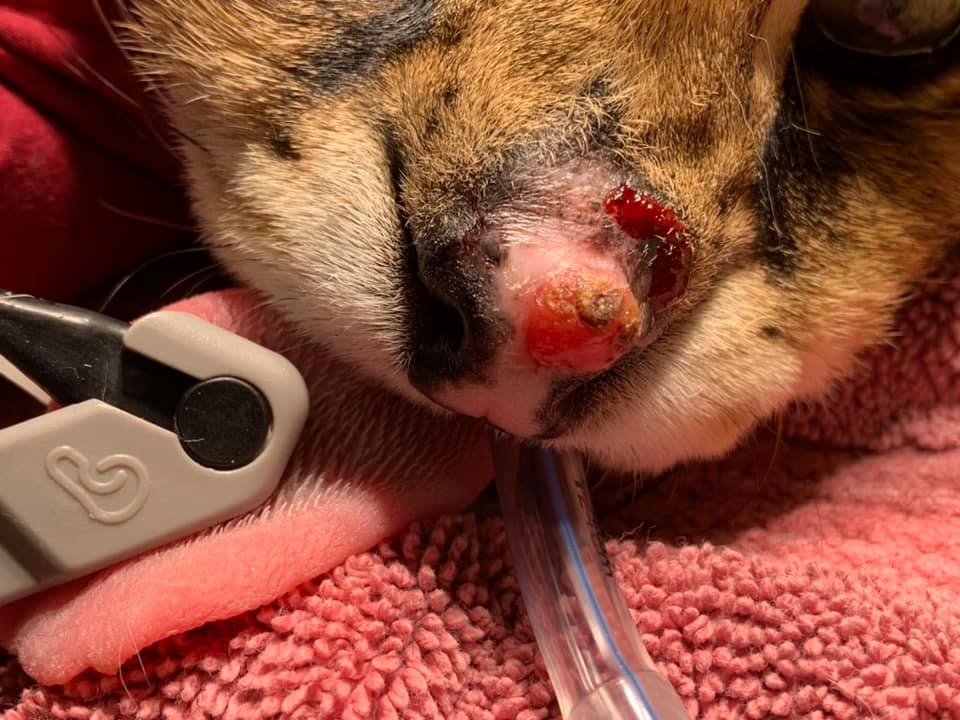 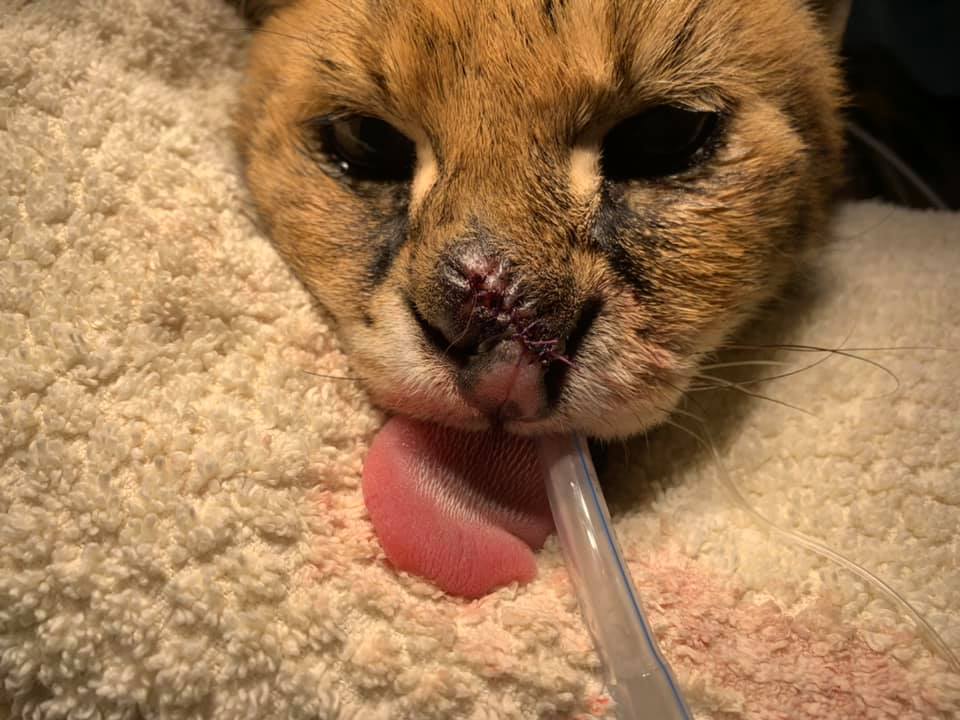 Servie is back outside but has moved to Beachers enclosure lakeside. Her results came back as squamous cell carcinoma (the same cancer as Tonga serval). She is not a candidate for surgery due to her allergies and age, so we will do our best to keep her comfortable and give her the best quality of life. We hope this enclosure will have less mosquitoes to bother her. 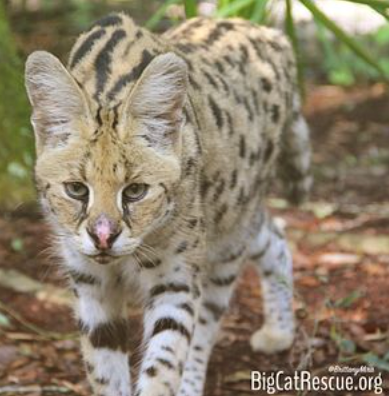