0
SHARES
358
VIEWS
Share on FacebookShare on TwitterShare via Email 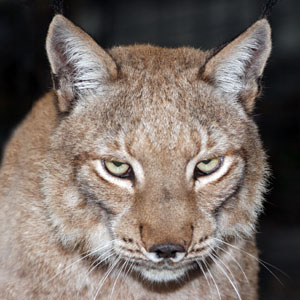 When Apollo arrived at Big Cat Rescue, he had severe parasite issues. With veterinary care, a nutritionally balanced diet, and a little time, he was able to make significant improvements very quickly.

He was rescued with another male Siberian Lynx named Zeus. He and Apollo had grown up together and become best friends. Although it is rare to see two adult male lynxes living together in the wild, it is considered a form of enrichment for those who have been raised together in captivity. That was the case with these two.

Apollo and Zeus share a large shady enclosure here at Big Cat Rescue. They play together, groom one another, stalk ducks together, and ever curl up next to each other when they sleep. They have a very special bond. They are both known to puff air from their nostrils when they are agitated. This especially occurs at feeding time. Due to this cute little trait, they have earned themselves the nickname of “The Hufflepuffs”.

Apollo has advanced kidney disease, which is not uncommon in older cats. Dr. Wynn is here to run blood work on him and get him started on a new medication. He will also be groomed during this time. He is unable to groom himself well up around his neck due to the severity of his arthritis at the age of 20.

Apollo was seen by Dr. Justin Boorstein. He was found to be slightly dehydrated and was given fluids. He also had a hotspot and required some grooming. To everyone’s surprise, he weighed in at 70 lbs. He will spend the next couple of days under observation in the hospital recovery cage.

Even though he had been provided an a/c unit earlier this summer as was getting extra frozen treats Apollo was having a very difficult time with the heat. With his advanced age, 22-years-old, and his advanced kidney disease, his decreased activity, and decreased appetite we fear our time with this amazing precious boy of growing very short. Today, he was moved into the cat hospital to see the vet. Here is a more detailed update from Carole.

Apollo spent the afternoon resting comfortably in the hospital in the a/c.  Afton was able to coax him into eating 10 ounces and drinking some water.

Apollo Lynx was euthanized today by Dr. Justin Boorstein. X-rays and Ultrasound showed what looked like tumors on his kidneys and one the size of a tangerine in his intestines. His back issues were much worse, making it hard for him to stand. We decided to do exploratory surgery to make sure it wasn’t just an obstruction. What we saw let us know it was time to let him go. We are sending a sample out to the lab. Please post your tributes below. Thank you, everyone, who gave him 22 years of love.

HISTORY – Big Cat Rescue started out in 1992 with the rescue of a single bobcat named Windsong. This led to rescuing 56 bobcats and a lynx from a fur farm the following year. More than 100 exotic cats were rescued from becoming fur coats with the agreement that Big Cat Rescue would pay top dollar for every single cat if the fur farmers would stop breeding these bobcats for their fur. Learn more about Big Cat Rescue’s history and evolution.

To our knowledge, at the time of this rescue, there are no longer any fur farms in the United States that are raising these cats for their fur. Big Cat Rescue has bought out every U.S. fur farm known to us and we would like to do the same in Canada. We were trying to put an end to this practice in Canada as well with the rescue of Apollo and Zeus. However, we determined, in 1997, that in order to purchase the remaining cats at the known Canadian farm and build barely adequate housing for them, it would have cost over $95,000.

Over time, we have determined that we would not be able to buy our way out from under the issues and that things needed to change. Since then, we have focused and devoted all our time and energy on changing the laws to protect these animals. You can help too! Visit CatLaws.com to learn more about what you can do to make a difference.

You can find shirts, tote bags, mugs, necklaces, mousepads and so many more fun items featuring Apollo in our online gift shops. Go to reach gift shop linked below and search “Apollo.” Your PURRchases of Apollo Gear helps us provide for all the cats at Big Cat Rescue and work toward ending the abuse and exploitation of big cats.

Apollo with his pumpkin October 2018

If you enjoyed the short except video clip above of Apollo playing with his pumpkin go to BigCatTV.com to see the whole video.

See More Videos with Apollo in them

Please visit BigCatRescue.org/amazon-smile for how to sign up and let us know you did so we can thank you. ?

Apollo Siberian Lynx is quite a character. He fell off his den and then quickly looked around to make sure no one saw him. Photo by Lynda Licht

Apollo Siberian Lynx LOVES his Coolaroo which was a gift from online viewers.
Photo by Mary Lou Geis

Former Intern Stefanie Kraus Photo of Apollo 9/27/2014
(Check out becoming an intern so YOU can help care for the cats, too)

Check out Apollo’s photo album on Facebook.  It has 55+ photos there for you to enjoy.

Find bios of all the cats at BigCatRescue.org/catbio/