0
SHARES
46
VIEWS
Share on FacebookShare on TwitterShare via Email

Lisa Horsborough shares her experience from volunteering at a facility in South Africa that claimed to be raising white lions and golden lion cubs for release into Kruger National Park.

To find out what happens to cubs raised by humans when they are too big to handle:  CannedLion.org

Join us in the March for Lions event to raise awareness about the plight of lions:  MarchForLions.com

Join Big Cat Rescue’s Carole Baskin and her cat experts from around the globe.

In 44 cities around the world, from Stockholm to Sao Paolo, from Vancouver to Melbourne, Hong Kong to Cape Town.

ROAR FOR A CAUSE

If you are not marching, and even if you are, write protest letters and send emails to all the national and provincial authorities whose contact details are listed in this newsletter:

if in EU, lobby the European Commission to ban the import of trophies;

if in USA, write to US Fish and Wildlife calling on it to raise the status of lions to ‘endangered.’ That would stop the import of lion trophies there. 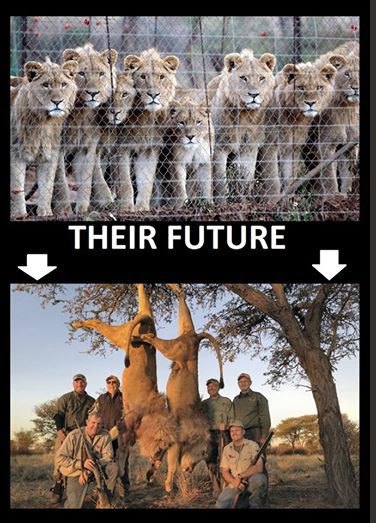 Why are we marching?

The SA canned lion industry is one whose whole business model is cruelty to helpless animals.

The cycle of cruelty starts at birth, and the callous practices brought in from factory farming. A miserable life in captivity ends with a violent death at the hands of sadistic hunting thugs.

This brutal enterprise is hidden from public view by hunting propaganda, which is designed to whitewash the sickening details. And, incredibly, the propaganda is promoted by the SA government.

Concerned citizens are routinely assured by both SA government officials and PHASA that: ‘canned hunting is not permitted in SA.’
Lies, lies and more lies.

Propaganda tries to cloud the issue by arbitrarily adopting a definition as narrow as a knife edge, and then denying that killing a tame lion in a larger camp is ‘canned hunting.’ But even some hunters are complaining about this public relations gimmick.

On any sensible definition,all hunts of captive – bred lions in SA are canned hunts.

For an idea of what the marches will look like, and to see photos of some of the organisers, click on this link here.Organisers and marches.

To read more about the march, and to see a list of all the cities, go to: GlobalMarch4Lions

Why lion farming and Canned Lion hunting should be banned:

1. Well let’s start with the cruelty.  Bow hunting of tame lions is permitted in some provinces. Imagine the public outcry if farmers allowed hunters to come on to livestock farms and shoot sheep and cattle for sport?

2. It is causing a backlash against tourism to South Africa. Ethical tourists are already boycotting SA, causing losses to the legitimate tourism industry. These boycotts will surely increase over time.

3. It is a wasteful use of land and resources for no public benefit outside the narrow commercial interests of the hunting industry.

4. Private deals with rich foreigners give plenty of opportunities to unscrupulous soldiers of fortune for fraud and foreign currency swindles. Forensic audits need to be conducted across the industry, to protect the fiscus.

6. It is fraudulent at so many levels, right down to the sale of lion bones as tiger bone wine or cake, that have no proven medicinal value. Read Millions of dollars for old bones

On our website www.cannedlion.org you’ll find all you need to know about canned hunting, with a selection of relevant TV videos.

The Head of Department
Gauteng Department of Agriculture, Conservation and Environment
Email:lydia.onsongo@gauteng.gov.za

The Head of Department
Northern Cape Department of Tourism, Environment and Conservation
Email:dpaulse@half.ncape.gov.za