Joseph the lion was rescued along with several other lions and tigers who had been bred to be used as photo and ego props.

When a lens luxated due to old age it became very irritated and had to be dealt with right away.  Dr. Miller, Dr. Wynn and Dr. Boorstein all came in to the Windsong Memorial Hospital to see if the eye could be saved.  Stay tuned.

What do you do when a lion needs a vet?

Call in a team of experts for a lion size house call. Keepers reported that Joseph the lion wasn’t eating and was wobbling when he walked. It was a Sunday afternoon and there is no place nearby that we could take a lion for X-rays. Dr. Justin Boorstein and his friend, Dr. Tim Jones sedated Joseph lion to draw blood and do a physical exam. Interns held the Y-stick on Joseph, in case he woke suddenly and pumped fluids into Joseph as he slept. Dr. Justin Boorstein listened to the lion’s breathing and heart beat as Dr. Tim Jones kept an eye on the anesthesia. Every intern had their job, from protecting the vets to logging each drug, each change in vitals and giving fluids. That is a lion size heart monitoring cuff! Dr. Fay Herrero, from Odessa Equine Clinic brought out his portable X-ray machine to make sure there were no broken bones. Dr. Fay Herrero had been making house calls all day for horses, but this way probably his only lion call of the day. The portable X-ray was not powerful enough to penetrate Joseph’s abdomen. We tried to find a vet with a portable sonogram machine, as well, but had no such luck. Dr. Justin, Cody and Michael lift Joseph so the X-ray pad can be positioned under the sleeping lion. Dr. Fay Herrero will be on speed dial until our own X-ray machine is up and running. Despite all of the diagnostics, we still do not know what is causing Joseph to feel bad. Hopefully his blood work, which usually takes a few days, will let us know how to proceed. When Dr. Herrero left he said, “You have an wonderful group of people here!” Most cases that 6 years or more to prosecute so animals suffer most or all of their lives waiting for help to arrive.  The only way to put an end to the suffering is to end the private possession of big cats and eliminate the USDA loophole that allows people to keep big cats if they have a $40 USDA license.  It is too easy to get and too hard to lose to provide any sort of enforcement of the Animal Welfare Act. More Info About and Photos of Joseph 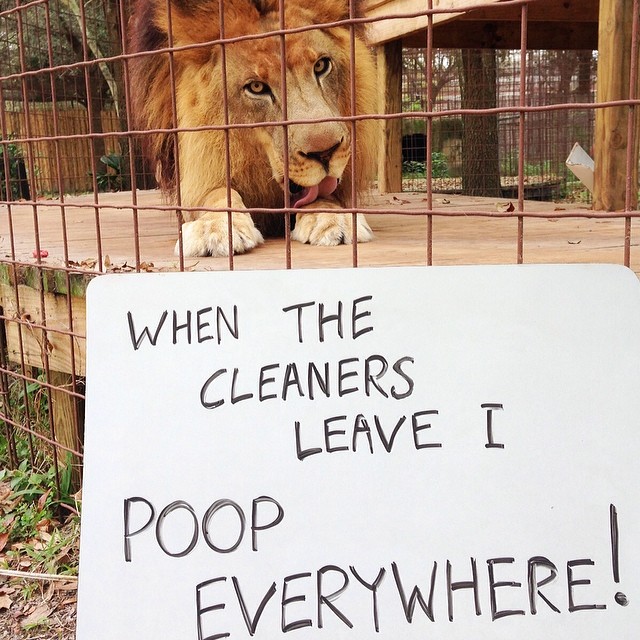 Do lions cough up hairballs? Check out this specimen from Joseph:

Scroll down this link to see a video of Joseph eating his much loved vanilla ice cream: http://bigcatrescue.org/cat-chat-show-notes-june-19-2013/

Tigers, Lions, Leopards, all cat species can catch fleas, so at Big Cat Rescue we have to treat all of our 100+ residents with flea prevention just like your domestic cat at home every single month!: http://bigcatrescue.org/how-to-flea-treat-100-big-cats/

Check out Joseph the lion doing some “gardening” in his enclosure: http://bigcatrescue.org/lion-gardening/

Despite all the commotion today, Joseph the Lion just couldn’t care less. (scroll down to find the photo): http://bigcatrescue.org/today-at-big-cat-rescue-dec-28-lion-display-at-mgm-to-close/

Joseph the Lion Before and After: http://bigcatrescue.org/today-at-big-cat-rescue-may-11-ohio-legislative-update/

Download a free iBook or PDF, “The Lions of Big Cat Rescue”: http://bigcatrescue.org/books/

Scroll down this link to find a photo of Joseph entitled “Joseph the Lion makes his mark on Big Cat Rescue”: http://bigcatrescue.org/today-at-big-cat-rescue-apr-12-2/

Photo entitled, “Joseph the lion is one of our best singers”: http://bigcatrescue.org/today-at-big-cat-rescue-jan-26/ 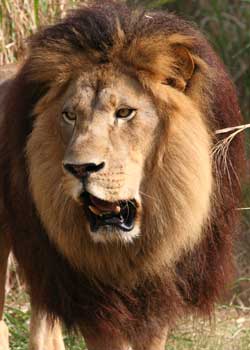 Come along with Carole Baskin using Google Glass while catching a bobcat, caring for an elderly tiger, shaving a bobcat, watching staff building the “Bobcat Tower of Terror,” talking with Simba Leopard on vacation, catching and sending Sabre Leopard out on his first vacation, checking in on the feisty little Cypress bobcat, a sneak peek at Genie the sandcat, Joseph lion taking a long, cool drink and more: http://bigcatrescue.org/cat-chat-45/

A page with a few videos about Joseph’s Rescue: http://bigcatrescue.org/lion-and-tiger-rescue-from-siberian-tiger-foundation/

A photo of Joseph waiting on another treat: http://bigcatrescue.org/today-at-big-cat-rescue-oct-2-2012/

Photo entitled, “Joseph and Sasha the lions are all sleepy eyed”: http://bigcatrescue.org/today-at-big-cat-rescue-july-11/

Find a photo of Joseph and Sasha the lions on a lazy afternoon: http://bigcatrescue.org/today-at-big-cat-rescue-oct-10/

Watch as we let Joseph and his pride of another lion and two tigers into their new large enclosure: http://bigcatrescue.org/josephs-pride-lion-tigers-new-beginning/

Joseph’s Pride are two lions and two tigers that were rescued from a facility in Columbus, Ohio on October 19th, 2007: http://bigcatrescue.org/lions-tigers-josephs-pride-update/

A lion of a different stripe: http://bigcatrescue.org/a-lion-pride-of-a-different-stripe/