0
SHARES
115
VIEWS
Share on FacebookShare on TwitterShare via Email

Tampa March for Lions is a Roaring Success

The Tampa March for Lions may have just seemed like one heck of a party, but thanks to everyone who came and fundraised for the event, we were able to net $10,000 and we wanted to spend it on ways to help lions outside our gates. The movers and shakers behind the Global March for Lions were Chris and Bev Mercer of CannedLion.org. Any time we need the truth on what is happening in Africa regarding lions, we always turn to Chris and Bev. They have been the leading force against lion hunting and pay to play schemes that pimp out lion cubs, only to sell them into canned hunts as easy targets. They would never ask for help, but this event made it possible for us to contribute $7,000. to their continued efforts to ban lion hunting. Chris said this is the equivalent of a small fortune in his world and that he will put it to good use in protecting lions.

We were impressed with Nat Geo’s Cause an Uproar campaign and donated $1,000. to their BuildABoma.org project. This will build two bomas to help protect lions from being killed for harming livestock.

We have long been impressed by Animal Defenders International because they are a small organization that has been winning huge victories for animals. What really brought them up on our radar was the amazing work they have done in the past few years to ban circus acts that use wild animals in 20 + countries. If you saw Blackfish and thought, “big cats need a movie like that,” then you have to see Lion Ark. We saw it and were so enamored that we sent $1,100. to help with their efforts to free all big cats from circuses.

Before the March for Lions even began we sent the early money we raised, in the amount of $900. to Walking for Lions to be a major sponsor for the cycling event from Kenya to Botswana to raise awareness of the plight of lions. So, thanks to your generosity we are raising awareness, supporting boots on the ground, giving locals a way to live with lions, rescuing lions from circuses and letting everyone know that when you pay to play with a cub, the cub is always the one who pays with his loss of life and liberty.

See what 570 lion lovers look like when they come together to march for lions.

See the photos from the Tampa March for Lions here: https://www.dropbox.com/sh/gp6i6tcwdy8pyv6/iKO4YsnO1j

We sent this letter to Chris and Bev Mercer ,of the Campaign Against Canned Hunting, who have been our most trusted resource on all things involving African cats:

By all accounts, the 2014 Global March for Lions was a huge success!

We had over 570 people show up for the march, plus 60 or more of our own volunteers to manage it. We were sold out at 500, and let 70 more squeak in, but had to turn away scores of people, so I think we could double the size of the event next year.

We had news coverage on Fox, NBC and TBO.

We had some major organizations fundraising for us, including the Girl Scouts, Big Brothers, Big Sisters, Invest Financial Corporation and C1 Bank, so that was a lot of exposure inside their organizations as well.

We grossed over $17,000 so I’m guessing the net will be about half that, as a lot of that figure was in tee shirt sales, and the sale of plushy lions.

Big Cat Rescue was a $1000.00 sponsor of this event to raise awareness about lions from Botswana to Kenya this weekend:  http://www.walkingforlions.org/wfl-campaign-2014/4581915111

I’d like to see how we can help this young man save lions: http://www.ted.com/talks/richard_turere_a_peace_treaty_with_the_lions

Do you know if his work, or work like it, can be funded by us?

We would like to help finance the building of bomas to protect lions from retribution killing.

AND last, but certainly not least, I want to know how we can help you with your campaign against canned hunting. YOU guys are the boots on the ground and know where our proceeds from our Tampa March for Lions can be spent to do the most good.

In addition to the above, we had 108 supporters call their lawmakers in support of the Big Cats and Public Safety Protection Act.  Annette was able to compose half an hour of supporters talking on camera to their lawmakers asking them to protect lions and other big cats by co sponsoring the Big Cats and Public Safety Protection Act.  We haven’t counted the written letters, petitions nor the post cards filled out and colored by children yet, but there were lines to do it all day, so it should be impressive.

This is a global event (15 countries and 62 cities with over 250 organizers of lion marches) to raise awareness about:

Cub handling, posing with cubs for photos, petting cubs and why that is always abuse

Walking with lions (walking lions on leashes and letting people walk out into groups of sub adult lions, so the lions get used to people walking up within shooting distance)

Canned hunting (where lions are shot for a fee in cages)

Lion meat issues (all of these are connected)

560 registrants will “march” through Big Cat Rescue to meet our lions and other wild cats and will take action to save lions by paw-sing at the end to be taped asking their lawmakers to “march the Big Cat & Public Safety Protection Act through Congress.” For more information about this bill go to: CatLaws.com

This event is to help people understand the link between paying to play with a cub in this country and lions being slaughtered for their fur, bones and meat, here and in the wild.

There will be a food truck rally at the sanctuary where you can buy great food and drinks from vendors such as PDQ, Disco Donuts, Tasty Stacy, Yogurtology, Burger Culture & The Cheesery and Health Freakz Cafe.

Have fun in the photo booth with silly props and a commemorative photo strip!

The Humane Society of TampaBay will have their mobile adoption office and cats who are looking for the purr-fect homes.

Karen Lynch will be signing copies of her children’s tale Finn McCool, the Magic Leprechaun Cat

Test your skills at Dunk the Poacher, or use your raffle tickets to play for great prizes, and even enter our Front Flip game to win an iPad mini.

Two first edition coloring books for the kids are all about lions and there will be a coloring contest with grrreat prizes.

The event will start at Citrus Park Crossings, the new office building on Citrus Park Lane. From Citrus Park Blvd. (the street the mall is on) turn south at the light that is by the Veteran’s Expressway just East of McDonald’s. Participants should arrive there, NOT at the sanctuary, as the food trucks and fun things to do will be set up in our parking lot.

Roar of Thanks to our Sponsors

Volunteer, Desmond Fowles, whipped up this rendition of The Lions Weep Tonight

Tee shirts will be available at the event and free to those who raise $25. or more. Here is the tee shirt logo: 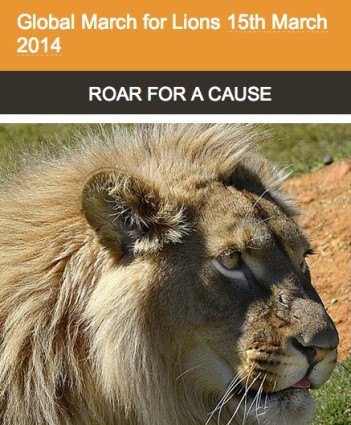 How is cub petting connected to lions being killed in the wild?

There are at least two primary ways that paying to pet a cub results in that cub growing up to be shot in a cage and slaughtered as a trophy, or for his or her bones, fur or meat.

1.  In Africa there are many “parks” that offer the opportunity to bottle feed, or pose with lion cubs.  Some will offer “walk with lions” where you walk among juvenile lions so that they get used to the idea of people walking right up to them to shoot them.  They always tell you that it is for conservation and that the cubs are orphaned or rejected by their mothers, but it’s a lie.  That is just what they know you want to hear so that you can feel good about touching a wild animal that would never let you do so if they had a choice in the matter.

NONE of these parks are actually doing anything for conservation.  The cubs are sent to canned hunts, which are fenced in areas where people pay to shoot lions as trophies.

2.  In America there are many zoos and pseudo sanctuaries that offer the opportunity to bottle feed, or pose with lion cubs.  They always tell you that it is for preservation of the species and that the cubs are orphaned or rejected by their mothers, but it’s a lie.  That is just what they know you want to hear so that you can feel good about touching a wild animal that would never let you do so if they had a choice in the matter.

USDA guidelines only allow that contact between the ages of 8 and 12 weeks, so every month a new litter has to be produced for the public to use as photo, petting and ego props.  We estimate that 200 lion, tiger and liger cubs are bred each year and hawked to the public as orphaned, rejected or needing human bonding.

When they are no longer lucrative money makers, they quickly grow to 300-500 lbs and begin costing thousands of dollars a year to feed and house so they are given away to ill prepared, pet owners, or sold to brokers, who sell them to exotic meat markets in the U.S.

In Africa there are limited permits issued to kill lions and other wild cats.  They are killed in the wild and on game farms in cages, but the hunting companies don’t want to limit themselves to the export permits that they have obtained legally, so they sell the same permit over and over.  The problem for them is that they can only export one carcass per permit, so when someone comes from the U.S. to pay $50,000 to shoot a lion, they let them do so, because there is no one on site monitoring how many times lions are killed, but when it comes time for the “hunter” to get his trophy, the African hunting outfitter calls a broker in the U.S. and orders up one of those excess lion cubs from last year’s pay to play schemes to be killed and forwarded on to the “hunter.”

Don’t pay to see, touch or pose with baby lions, baby tigers or baby ligers.  If you do, their blood is on your hands.

Save the Lions while you still have time to roar!

One response to “March for Lions”