0
SHARES
134
VIEWS
Share on FacebookShare on TwitterShare via Email

The Great Pretender came to Big Cat Rescue at the same time and as a litter mate to Precious. We named him the Great Pretender because he always pretended to be so “bad” when he was little. Unfortunately, once he was full grown he wasn’t just pretending anymore. He does not care for people much and actually grew to be quite aggressive especially at feeding time. This changed dramatically after he began to participate in operant conditioning sessions. He is much calmer when being fed which in turn makes feeding time less stressful for him and more safe for keepers. 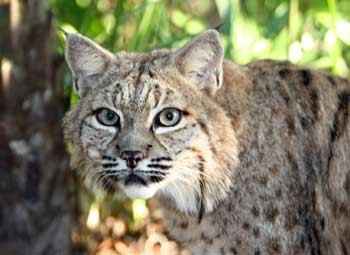 When I was in grade school my father (Vern) was a Private Detective and our family believed in raising their own kids so after school, instead of ending up in daycare, I ended up on stakeouts with my dad. I learned to look for clues and to notice patterns in behavior. It has served me well, but this set of clues has me befuddled. As you know from the Safari Guide, Precious and The Great Pretender are littler mates who we rescued from an auction where they were being bid on by taxidermists. They were 6 months old when they came home with us in October of 1992. They were already vicious, so we never handled them when they were young.

It wasn’t until 2010, when Pretender was being checked out for neurological issues that we discovered he had been declawed on the front and one toe had been declawed on the back. Well, that was weird, but we didn’t think much of it. Then, back to back Precious ended up on the Observation Chart for a malformed claw and Pretender was on the chart for not eating. The video below is 23 minutes long and not required watching, but shows you the lengths we went to in order to clip Precious’ nails, without sedating her. At 21 years of age, we really didn’t want to sedate either of them because the sedation can be very dangerous.

Pretender’s issue was not as easy to assess, so he had to be sedated for a full blood work up, sonogram and rotten tooth extraction. While Jamie and I were trying to wake him up, which took more than 6 hours, we began wondering aloud about why someone would have these two kittens, probably as pets, and yet one was declawed on the front, and one toe on the back and the other kitten had all her claws? Maybe Pretender had been declawed front and back and just had some grow back in. Maybe the people realized after the surgery just how scary it is to sedate a cat (did they have to finish before they were done due to some emergency?) or maybe they just felt so bad about doing that to him, that Precious was spared? If they cared so much, then why would they offload the kittens at an exotic animal auction where taxidermists would bid on cats to turn into den decorations? Who knows?

What we do know is that Precious and The Great Pretender have lived long healthy lives here; thanks to all of you keeping such a close eye on them and because of the great care you give all of the cats.

The Great Pretender Joins Precious Over the Rainbow Bridge

This morning the Great Pretender was able to rejoin his sister Precious in Heaven.  She passed on two years ago and we all thought that Pretender would be the first to go.  He had been examined back in 2010 for neurological issues that caused his head to bob from side to side and gave him the gait of a drunken sailor.  He’s pretty much been on death watch for the last six years and has had extra special attention given to be sure he eats and drinks enough.  Most of his time was spent sleeping. For the last year he’s been pretty much blind, but his keepers made sure he could find his food and water.

His keepers would feed him a couple times a day and would weigh his food before and after to make sure he was getting enough to eat.  His grooming was getting worse, as his arthritis got worse, so he was assigned special keepers who are trained to use the long handled combs to help the older cats with their fur.  He liked it for the most part, but would grumble at them occassionally, just to remind them how “bad” he is.  He loved to pretend he was the meanest bobcat in the world.

On June 22, Dr. Justin Boorstein came out to check on the cats.  We took a look at Nairobi Serval and then Angie Bobcat and while both could use a vet day, neither looked like an emergency.  There were 14 elderly cats on the list and the next one was The Great Pretender.  One look at the way he was making faces when he drank and the ginger way he took meat off a stick was enough for Dr. Justin to decide that the other cats on the list would have to wait.  Pretender needed to be checked out more thoroughly.

Absolutely horrible kidney values were expected, and found, as Pretender was our second oldest cat, at the age of 24. (Sabre Leopard is slightly older) What we didn’t expect was to find 9 bad molars.  He’d been on the chart before for being fussy once in awhile about eating, but for the most part ate his entire diet.  There had been no indicators lately of any issue with him chewing weird and his canines were in great shape.  Those are usually the only teeth you get a good look at.

Elderly exotic cat kidney values are always just off the charts, compared to domestic cat kidneys.  When they get to be as old as Pretender (twice the age that most bobcats live) there is always this tough decision to be made.  Is it time to let them go and euthanize them, or should we remove the obvious cause of discomfort and infection and see how they do?  When it is life or death, then it almost always seems that the right thing to do is to try.  We removed the bad teeth, gave him fluids, antibiotics and pain medicine and then put him in the the West Boensch Recovery Hospital to sleep off the anesthesia.

When we had sedated him back in 2010 it took a very long time for him to wake up.  Back then he was 18, which is our average lifespan at Big Cat Rescue for bobcats.  Now he was six years older, so we expected it could take 48 hours for the drugs to be completely out of his system.  The day after his surgery, Dr. Justin came to check on him again in the evening. He had slept all day, except for lifting his head when someone would enter the room. He was given fluids morning and night sub q, but had not stood or drank from him bowl on his own.  We feared this was going to be the end.  Dr. Justin scaled back the pain meds to make sure that it wasn’t drugs keeping him down, but he died in his sleep.

Even when you know it’s time for them to go, it’s still hard to say “good bye.”  The only good in it is knowing that he doesn’t have to spend even one more day in a cage.

How The Great Pretender Got His Name

Thank you Milady Blue for sending us this video.

How The Great Pretender Came to Big Cat Rescue

Some cats, including The Great Pretender were purchased at auctions where the uncaring owners were dumping the cats with no concern about their welfare.  The people bidding on such cats were usually taxidermists or those who owned canned hunting ranches.  There is much controversy over whether we did the right thing by paying the ransom for these cats.  We still accept many unwanted cats each year, but do not pay for them and typically require that their owner surrender their license, in an attempt to keep people from just trading in their cats each year for a newer, cuter model.  We have to turn away more than 100 cats each year due to a lack of space and funds and the lack of regulation of the exotic pet trade. Read more about our Evolution of Thought HERE

Tributes to The Great Pretender

Sharon Dower Jul 25, 2016
I will missed you Mr. P. I loved how you would stalk me then come over and just glare. The perfect Bobcat glare! I loved it!

Regina Turgeon Jun 26, 2016
Although I really didn’t know you, all the cats who leave us, will all be missed. What we can all say now is that he is not in pain anymore and now can be with his friend forever and be free. Run free Pretender!

Regina Rinaldi Jun 25, 2016
Aww Tender, my heart breaks for you. You were a beautiful bobcat and you and Precious make the perfect pair. Bobcats to the core. You were a grumpy butt, and you represented your species regally. But you knew unconditional love. We’ll miss you The Great Pretender.

Becky Gagliardo Jun 24, 2016
Am going to miss you so much my grumpy old man. At least you are with Precious and your love Elsa. Run free love.

Lynda Licht Jun 24, 2016
Pretender, you have always been one of my favorite cats at BCR. We all looked past that grumpy face of yours to see your beautiful soul. Thank you for six years of growls and barks and being you.

Carole Baskin Jun 24, 2016
Precious and The Great Pretender were the next cats to arrive, after our founder, Windsong the Bobcat. For a time they lived in a cage in our home, and Pretender would jump and spit at me every time I walked by to get to my desk. When we did the huge fur farm rescue in 1993, and had bobcats and lynx kittens running wild through the house, we had to cage my desk, so I could work without them peeing all over everything. Precious and Pretender first moved to a porch and then to a concrete slab with a 12 x 24 foot dog kennel on it and then finally to Easy Street where my Dad built them their own spacious 1200 sf enclosures. I always loved and admired The Great Pretender for never even trying to pretend that he was OK with the idea of being caged. I vow to him, and every other wild cat who was bred for life in a cage that I won’t stop until that barbaric practice ends.

Marie Schoubert Jun 24, 2016
Oh no! Sweet Pretender! You were such a fighter! I always loved you from the first day I met you. Not sooooo sweet back then, but still so beautiful! You always tried to make us beleive that you were the meanest, the biggest and strongest of all! But to me you were still the cutest! I will miss that gorgeous face of yours my little Pretender. I love you forever. RIP my love and say hello to Precious… We will never forget you!

One response to “The Great Pretender”