What should I do with an old fur coat?

0
SHARES
211
VIEWS
Share on FacebookShare on TwitterShare via Email 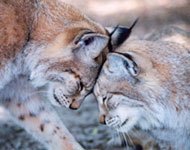 Just about every day I am giving a tour, or overhearing a tour, or responding to a reporter and discussing the way that Big Cat Rescue started; which was in buying all of the cats off U.S. fur farms to end that trade. Since I am thinking about cats being killed for their coats almost every day, I forget sometimes that there are people out there who don’t realize the cruelty involved in all fur products, until I hear from someone like Leigh.

She wrote to me recently and said, “In going through many belongings, I came across something I’d almost forgotten about. I have a lynx coat which was a gift that I want to “dispose” of. I do not want to sell the coat or donate it to any organization that would resell it or auction it off to anyone that might wear it (as some people have suggested).

I no longer wear fur, have not for a long time, and am very depressed, disgusted and want to cry any time I look at this coat. I do not want to do anything to promote the wearing of it.

Other than burning it, (or burying as some friends have suggested), I’ve tried to think of some way that it can be put to use as an educational tool. I do not even want to think about how many animals went into the making of this thing.”

I was touched by Leigh’s letter. She had obviously learned a long time ago that there is no humane way to part an animal from his skin. I know that I naively believed that animals were shorn for coats and have heard many, many people tell me they thought their fur coats came from animals who had died from natural causes. I think a lot of people just don’t think about where fur comes from in order to justify wearing it.

Leigh obviously had spent a lot of time thinking about the origins of this coat and how to honor the cats who had died. By donating it to our Education Department we can use it as a teaching tool to explain how such coats are made, how to tell real fur from faux and to contrast how beautiful our lynx are and how ugly a person wearing their fur is to those who have respect for life.

In talking with Leigh we told her that our presentations are limited to cat issues, so if the fur turned out to be made of fox or other animals, then the only use we would have for it would be to cut it up for nesting materials for our rehab bobcats. Her response was as beautiful as she is, “I do not even want to think of how many beautiful lynx died to make nothing more than an embellishment for the human willing to pay for it. I’d rather them become animal bedding than that.”

Who knows how many precious animals may be spared the horrific lives of being farmed for their fur or trapped and killed for the trade because of Leigh’s thoughtfulness?

For years I had mink coats, that had been purchased as gifts for me by my late husband, in the back of my closet. I didn’t know what to do with them either. I wouldn’t think of wearing them, but didn’t want to give them away and have others stimulate the demand for fur by wearing them either.

Part of me; that part that was raised to eat everything on my plate because children were starving in China, was sickened as I took scissors to the coats and made them into cat beds, but by the time I was done, I felt liberated. I believe that if I had been the mink who were turned into those coats, I would be happy to be set free from the awful design that took my life and glad to be back in the circle of life that enables the survival of wildlife.

We only rehab bobcats here, and very few each year, so we have all the coats we can use, but if you have a fur coat in your closet there are a lot of wildlife rehabbers, or even domestic cat foster homes, who can use the fur for bedding.  You can get more information on those organizations here: http://www.humanesociety.org/issues/fur_fashion/fur_coats_for_cubs.html