Is Carole Baskin Really Going To Be On Dancing With The Stars?

Yes, it’s true; Carole Baskin, founder of Big Cat Rescue, is going to be dancing her heart out on Dancing With The Stars!  Good Morning America confirmed what the rumor mills have been saying for weeks and what the cats have been sworn to keep under their cat hats.  The next question might be,

“How did that happen?”

After Tiger King, Murder, Mayhem and Madness engrossed the mostly captive audience of people around the world, who were just starting to see the effects of a global pandemic, the media couldn’t get enough.  186 media outlets contacted Big Cat Rescue over the next few days and most were wanting a reaction to the producer’s portrayal of an animal abusing, tiger killing, hitman hiring, liar being portrayed as a sympathetic character, while the animal welfare activist, Carole Baskin was portrayed as the villain.  Howard Baskin and Carole Baskin decided that the media couldn’t right that wrong with typical sound bites and are working on a more encompassing response.  Meanwhile, Jamie Veronica Murdock, President of Big Cat Rescue and co-founder with Carole Baskin, urged her mom to accept two of the proposals.

Carole Baskin had originally declined the offer from Dancing With The Stars because she can’t dance, but when Jamie heard about it, she insisted her mother hear them out.  Jamie said, “I want people to see what a fun and kind person my mom really is.”

During the call with Deena Katz, of Dancing With The Stars, Carole relayed her concern that she didn’t know how to dance, but Katz insisted her pro dancers could change all that in no time.  A lot of things would change this year for the cast and crew as COVID-19 is a real threat, but by the end of a few weeks everything was in place to insure the safety of all involved.  Carole began intensifying her workouts in virtual reality with the Supernatural app and began watching every dance tutorial she could find online.  She swore Big Cat Rescue’s board member, Lynda Licht to secrecy and took some quick lessons from her in ballroom dancing, stretches and exercises to prepare her for weeks of intensive training with the professional dance partner that she’d meet on September 1, 2020 for the first time.

Howard Baskin and Carole Baskin have been battling big cat abuse together since 2003 when they met and he joined the volunteer pool at what was then called Wildlife on Easy Street.  Since that time they’ve never been apart for more than a few days.  Howard Baskin stayed behind to care for their two feral cats, Pearlie and Mae and to continue handling legislative matters, legal issues and a myriad of other sanctuary related tasks.  Big Cat Rescue closed their gates to visitors on March 15, 2020 in the wake of COVID-19 and the negative fallout from Tiger King, Murder, Mayhem and Madness.  That resulted in a loss of 1/3 of the income and the staff had to be cut from 20 to 10.  The Baskins stopped taking paychecks for their roles, and like all of the remaining staff and volunteers had to take on twice the work.

“Why would Carole Baskin accept such a time consuming commitment?”

Carole answers that saying, “I’m going to put my heart and soul into winning the Mirror Ball because the longer I can stay on the show, the more the plight of big cats will be kept in the public eye.  We are so close to ending the abuse of captive big cats, through passage of the Big Cat Public Safety Act.  We just have to keep in on the minds of our Congressional leaders until it’s brought to the floor for a vote.  I’m hoping that seeing me go way out of my comfort zone will encourage everyone to call their Senators and House members in support of our bill at BigCatAct.com” 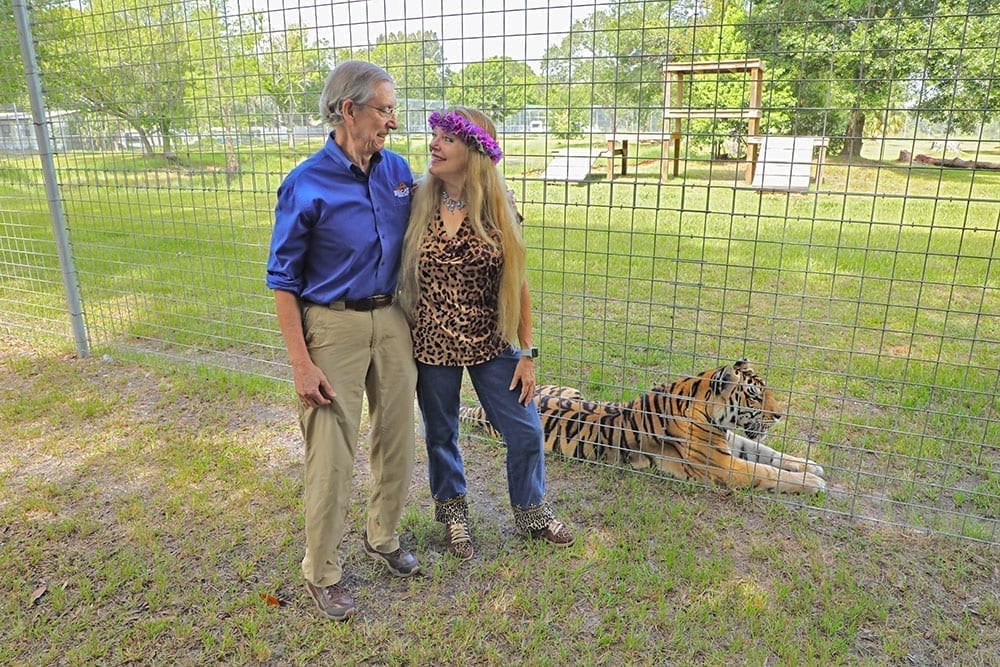