Flint’s First week has shown a lot of improvement, check out this video of his first week in rehab. Watch him go from not being able to walk to wrestling with his special ‘stuffie.’

Below is a chronological walk thru Flint’s journey.

Whenever the Big Cat Rescue van pulls out the gate, you know someone is about to be rescued. Stay tuned!

Big Cat Rescuers are on our way back with Flint a 13-week-old bobcat kitten that was injured by hunting dogs who were tracking wild boar. The kitten is unstable and it is difficult to tell which legs may be affected. Otherwise, he is bright and alert. Flint will be examined and weighed upon arrival and then we will determine if he needs emergency vet treatment or if he can wait until Dr. Justin comes in tomorrow for his usual rounds. While the rescuers are on the road the team at the sanctuary has everything all set up and ready for the kitten’s arrival. The rescue team, Jamie and Victor, have arrived back at the sanctuary. The wild bobcat kitten has been named Flint and will be seen by Dr. Justin tomorrow.

Flint was seen by Dr. Justin Boorstein for diagnostics.  He ate and drank well overnight, last night.  His SNAP test was negative for any cat diseases.  His X-rays showed no broken bones.  His physical exam showed no punctures or cuts.  We were concerned that there might be bleeding in the lungs, as he sounded raspy, but under anesthesia, with a stethoscope, the lungs sound clear, so it could be damage to his vocal cords or throat.

Because he’s only 3 pounds, 12 ounces, and has tiny little bones we sent out the X-rays to Oncura Partners for a second opinion.  We could see there was a bit of a mess around his lungs and heart, but couldn’t tell if it was congenital or caused by the trauma.  Oncura Partners had the same reaction.  They said it could have been a pre-existing condition (which might have caused him to be slower in getting away from the dogs than his family) or it could be due to the trauma.

It’s hard to believe this could have been a congenital issue because Flint is in very good body condition for a wild bobcat kitten.  We don’t think he would have thrived if he had these serious conditions before being caught by hunting dogs.  All we can do now is keep Flint on pain meds, anti-inflammatories, antibiotics, and a good diet while keeping him quiet and safe.  Cats have an amazing ability to heal themselves, so keep sending good vibes his way and hopefully, he will be joining Cinder and Ash soon outside in rehab.

Flint is getting x-rays

Finishing the exam and getting paw prints

Flint is doing a lot better, so we are continuing the same course of treatment and sending this video to a neurologist. As you can see in this video he is now able to walk and is doing better but is still not normal.

Flint Update – Thanks to all our amazing donors that we could spend the $3,800.00 necessary for Flint Bobcat to get the MRI he needed. The only thing they found was the broken neck. Sending off the spinal tap for testing. For now, the only thing that can be done is to keep him quiet (small cage) and feed him a proper diet, in the hopes he can heal himself. Surgery was not advisable and the results are being sent off to yet another radiologist, just in case anything was missed. — with Laura Diodati at Levine Veterinary Neurology. Here is an image captured during the MRI showing Flint’s fractured vertebrae. This image with contrast shows the inflammation (the brighter area). This inflammation could be causing the majority of Flint’s lameness. Hopefully, steroids will help ease this and cage rest will help Flint heal. At the conclusion of the MRI we found a fractured vertebrae c7. His imaging results will be reviewed by radiologists as well to ensure nothing was missed. In the meantime, a spinal tap was performed to test for infection, infectious disease or cancer. In addition, both of his knee caps have a significant amount of “play” due to his rear leg bones suffering from curvature as a result of his hunched gait. He will be on the hospital cage rest for the next 7 days.

I snapped a cute photo of Flint the rehab bobcat while filming his walk for the vets. by Afton Tasler

Our special needs rehab bobcat Flint gets a check-up by our veterinarian Dr. Boorstein. Check out how it went and what we learned about his physical health. Flint’s follow up exam went very well.

Flint, the baby bobcat in recovery, purring, attacking his bed, and ‘making biscuits.’

He has not sustained any more damage to his bones and he has been cleared to move outside to the small sections of the rehab enclosure.

Get another update from our veterinarian Dr. Boorstein on our special bobcat Flint. Learn about what his future holds and what we are doing in the meantime.

Flint has passed his outside tests and has moved outside meaning his inside webcam has been unplugged since he is no longer in there. He is doing well, growing and getting stronger every day. The cage he is in has been modified to prohibit climbing. Keepers will be looking him over well every day to make sure he is not injuring himself.

Flint the bobcat is now a permanent resident.  Flint arrived on June 30th after having been grabbed by hog hunting dogs.  He was very weak in his hind legs and displayed concerning neurological symptoms. He tested off the charts for toxoplasmosis, X-rays showed deformities to his shoulder and pelvic bones and an MRI confirmed that he had two fractured vertebrae.

During his care and while cage rested Flint managed to break both his rear legs. Because of his very limited cage space at the time in combination with the other bone deformities he already had the vet team determined he had severely weakened bones. Either due to a disorder or early on malnutrition before arriving here.

This in addition to a narrowed and collapsed pelvic canal means that Flint cannot pass large whole prey and therefore is not a candidate for release.  We have asked FWC and been granted permission to transfer him to the sanctuary as a permanent resident.

The rehab team is very saddened that Flint will not live the free life he was supposed to have. However, his deformities and future medical needs would prohibit him from survival in the wild.

Chris from Cole and Marmalade donated a big castle for Flint Bobcat to play in.  Keepers Afton and Brittany had a great time filming it after they put catnip and cinnamon in/on the castle.  This is Little Flint’s first big enrichment.

Brittany’s LIVE of Flint’s first reaction to his new castle:

Afton put a couple of GoPro cameras inside the Castle. Check out the video below to see what fun she captured.

Learn more about our wild bobcat rehab and release program at BigCatRescue.org/bobcat-rehab/

Flint has stormed the castle! 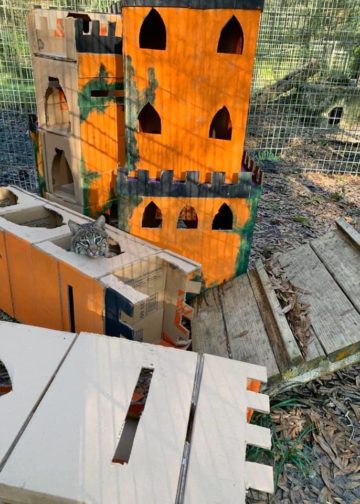 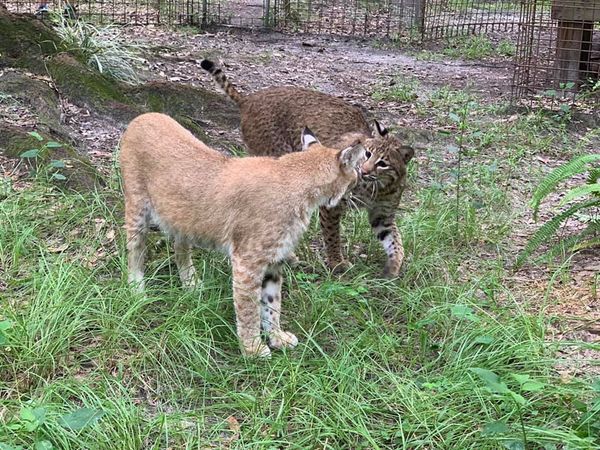 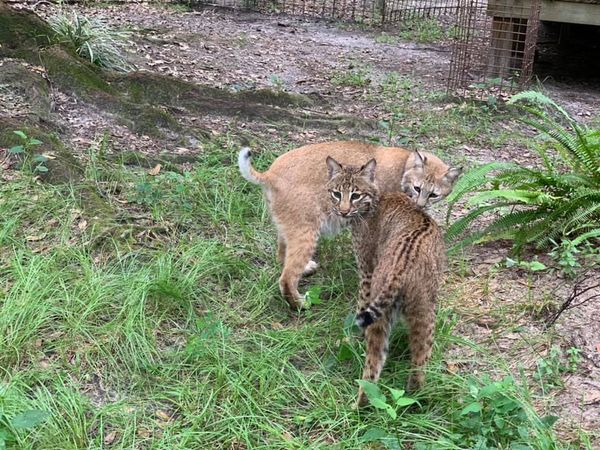 Looks like Flint and Nabisco had a great time with their snowball enrichment overnight! 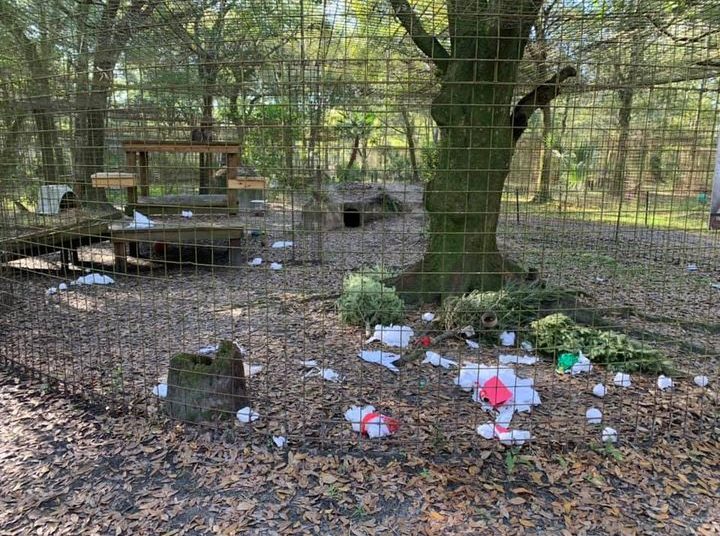 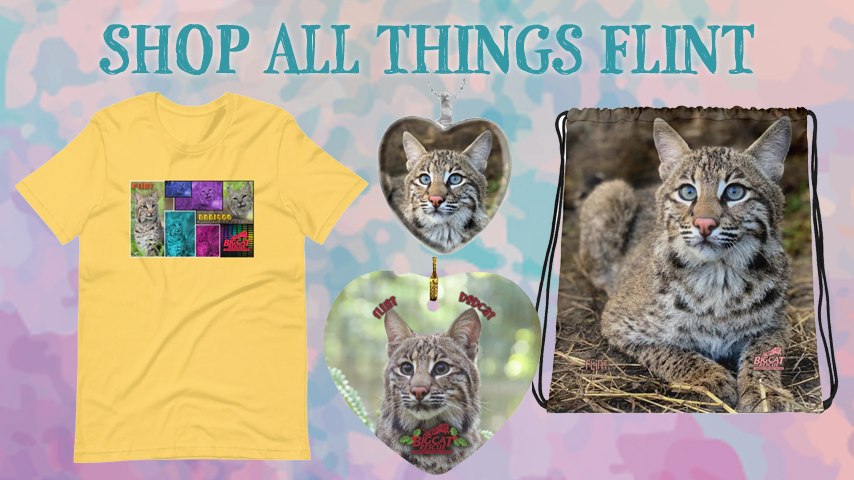