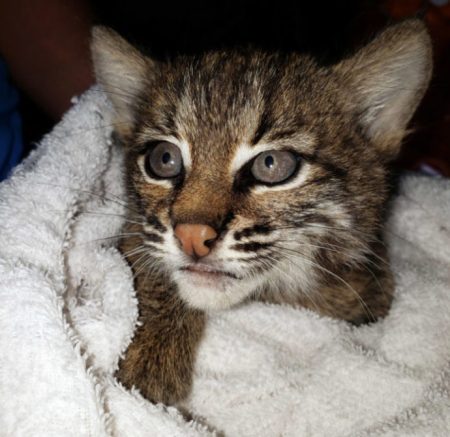 Foxtrot is a Native Florida Bobcat

Early morning on June 23, 2018, Carole received a call about a baby bobcat who had been separated from its mother by barking dogs, who had cornered her in the yard.  They thought it was a domestic kitten and took it to someone who runs an opossum rescue.  They realized it was a bobcat kitten and they called us.

She is about the same size as Bravo and Tango.  We think she is close to being weaned.

Carole and Kathryn picked up the tiny bobcat kitten.  She had been found only 48 hours earlier to Kathryn and Carole took her to the area she was found in hopes she could be reunited with her mother.

She has diarrhea which could be a result of the formula or cat food she had received but we won’t know until Dr. Justin sees her.  Back at the sanctuary Afton and the team got busy setting up a cage in a recovery hospital so everything would be ready for her arrival.

Little Foxtrot has two white toes on her back foot.

Carole and Kathryn took the kitten out where she was found to see if the mom would perhaps be there calling for her lost kitten.  It was the hope that the kitten would recognize the sounds and smells and call for her mother.  Sadly, all they heard was dogs barking which caused the scared little kitten to whimper.  It was a long-shot but they had to at least try.

Carole and Kathryn arrive at the sanctuary with the tiny kitten.  They first weighed her in the carrier.

Learn about our wild bobcat Rehab and Release Program From that link you can also find the stories, photos, and videos of the many wild bobcats who have come through our rehab and release program and returned to the wild where they belong.

There are many ways to donate.

Set up a Facebook Fundraiser for Big Cat Rescue. Learn how at BigCatRescue.org/facebook-fundraiser/

You are invited to join our Official Facebook Group to see even more photos and videos of the cats at Big Cat Rescue.  Keepers often post their photos and videos there as well.  You can chat with other viewers who love big cats.

Have You Seen Me?

LIGER at the Dentist!

Lion + Tiger = LIGER! freckles was rescued from a failed backyard sanctuary in ... Skip the Bobcat is an Internet Sensation

Skip the Bobcat Rescue   I was right in the middle of sending an ... 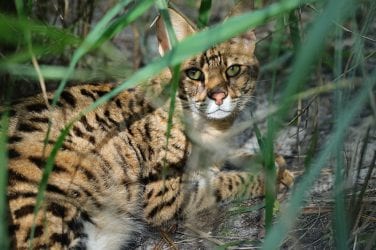