0
SHARES
3.8k
VIEWS
Share on FacebookShare on TwitterShare via Email Kali (pronounced Kah-lee’) the tiger was born in a travel trailer in the year 2000 the day after her mother and a transport full of tigers, leopards, cougars, bears and wolves were dropped off at the Augusta Conservation Education in GA.  The founder of the organization rescued over 300 animals in the 20 years that he ran the facility, but by 2014 he could no longer afford it and began placing the remaining animals.  The International Fund for Animal Welfare asked if we could take Kali, the last cat on the site and we agreed.

The Hindu goddess Kali is the fierce destructive form of the wife of Shiva, but also considered the goddess of time and change.

Kali’s previous owner shared many of Big Cat Rescue’s ideals of a sanctuary including no breeding, buying, or selling, but he did believe in physical interaction with his animals.

Big Cat Rescue takes a hands off approach to working with the big cats. Even though these animals were born and raised in captivity they are still wild animals and having close physical interaction puts both the people and animals at risk of serious injury.

Overall Kali was well cared for. She had been fed a good diet and had a spacious although barren cage. Because Kali was so well fed she was very difficult to lure into a transport cage. Her owner did not want Kali to be sedated and so he spent weeks trying to get her accustomed to going in the transport cage to receive her food. His patience paid off and the day of the rescue Kali loaded up within seconds. When Kali first arrived she was depressed. She would spend the entire day sulking from atop her platform. At dinner time she would come down to eat, but would then immediately go right back up to her perch. Perhaps she missed her owner and the interactions they shared.

Most of our cats were mistreated before their arrival and are happy to find a new home where they are loved and fed a good diet. Kali had a different experience in that she was cared for, and then suddenly was moved away from the only home she had ever known. A lot of people rescue animals with the best intentions, but when life happens they find themselves no longer able to provide for the animals that they have committed to.

This was the case with Kali’s owner. He was going through a bitter divorce and neither he nor his wife were able to provide sanctuary to the animals that they had rescued.

Thankfully for Kali she will never have to worry about being moved from her home again. Big Cat Rescue will provide her with a stable and loving home for the rest of her life. A few weeks after her arrival Kali made a complete turn around. She bounces up to keepers chuffing all the way, plays with her toys and enrichment, and loves lounging in the tall soft grass.

Big Cat Rescue will be her forever home because we operate this sanctuary in a responsible manner that ensures all of our cats will have a permanent home regardless of changes in the economy or even the leadership of the sanctuary.  We have done this by creating detailed strategic plans, setting aside money for reserves and training all of our staff and volunteers extensively.  People like you, who learn about the plight of these cats, and who donate to help, are the way we can continue to help cats like Kali. What is Kali day dreaming about? 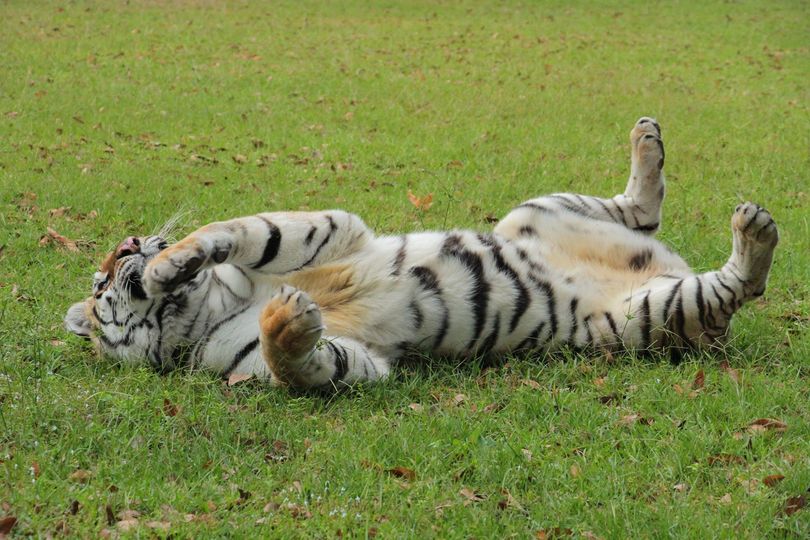 Check out this drone footage of Kali going on Vacation!

Kali takes her first dip in her resurfaced pool. 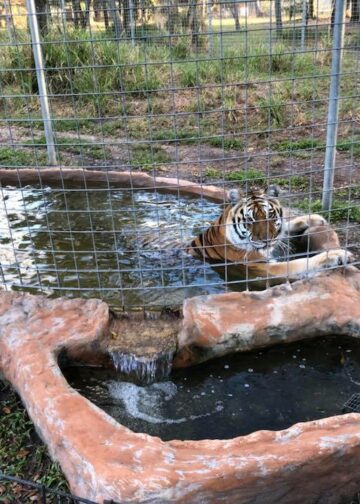 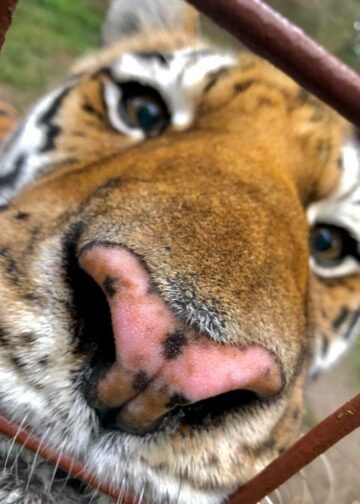 Who will Kali the tiger predict? 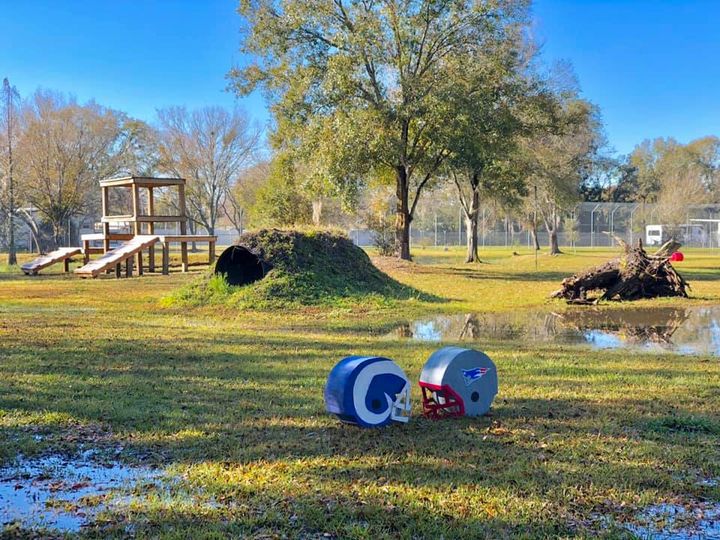 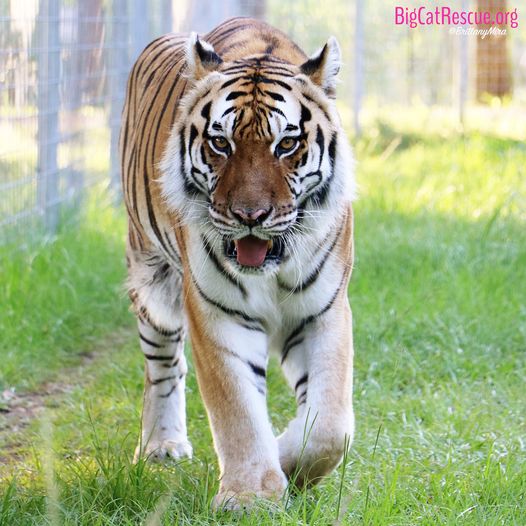 Kali Tiger is the poster child of how to move home from Vacation Rotation!

Kali got a new platform with a donut and a cool sand bed to lay on while she enjoys her view of the lake. 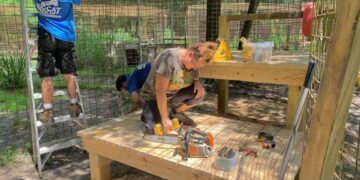 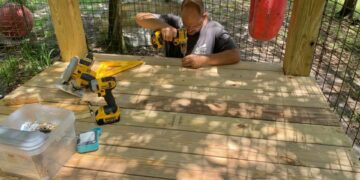 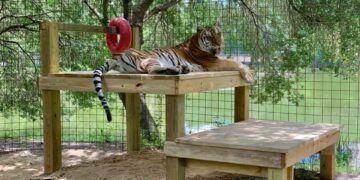 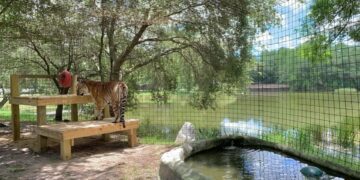 Kali having breakfast on vacation in Vacation Rotation!

Kali Tiger was seen today by Dr. Justin Boorstein and Dr. Gingrich (dentist) for a wellness exam and dental. Kali has never needed to see the vet before now so this is her first sedation since arriving in 2014!

Kali weighed in at 400 pounds! 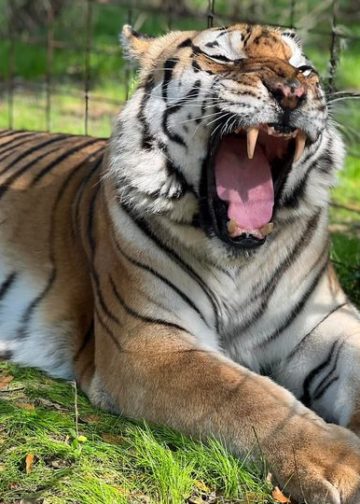 Kali had 2 root canals and an incisor extracted yesterday. She plays a little too rough with her toys. Big thanks to Dr. Boorstein and Gingerich for taking such good care of this big beautiful lady. She has been pretty slow to wake up and mobilize. Late this afternoon we were able to get her out of the transport and back into one section of her enclosure. She has limited access due to her weakened state in her rear legs which can be attributed to both pain medications and being manipulated in and out of the transport for surgery. We have discontinued the pain meds for now and will be giving some stronger anti inflammatories. 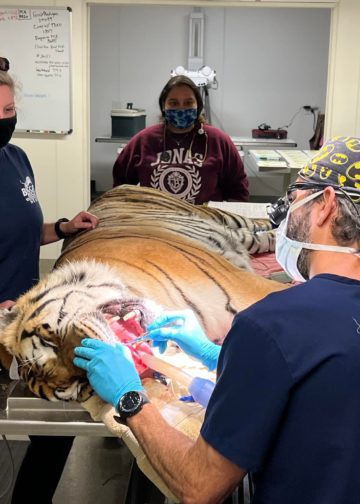 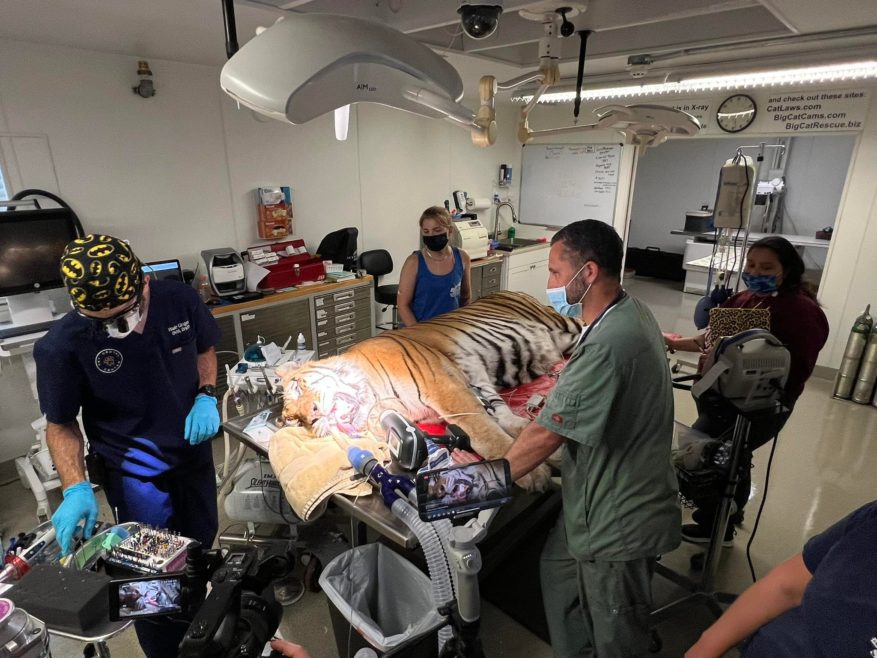 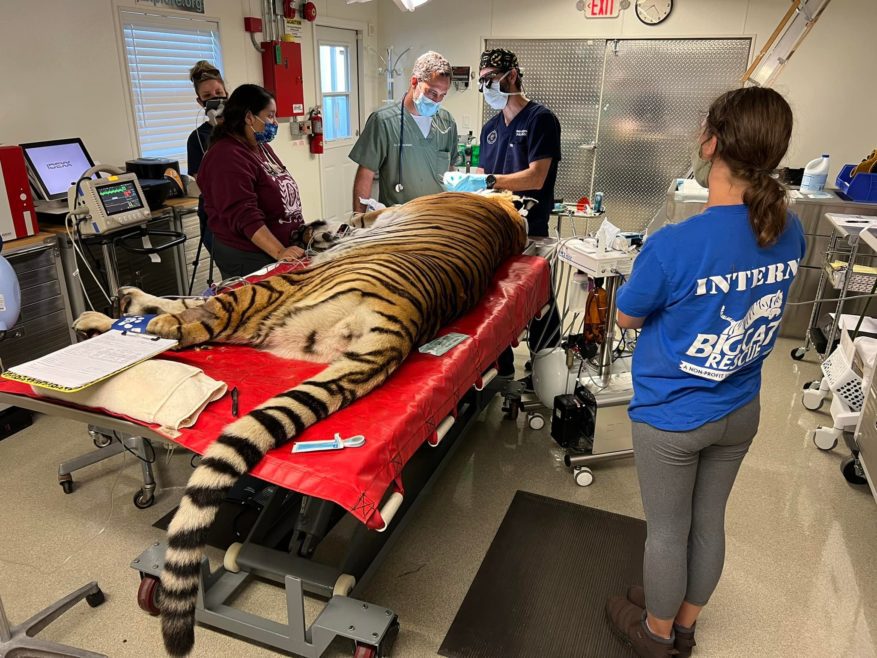 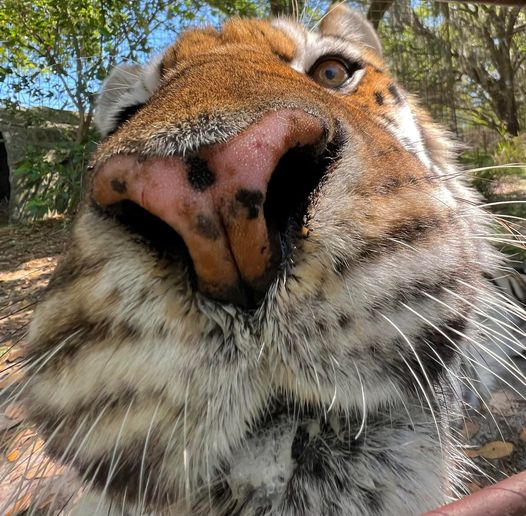 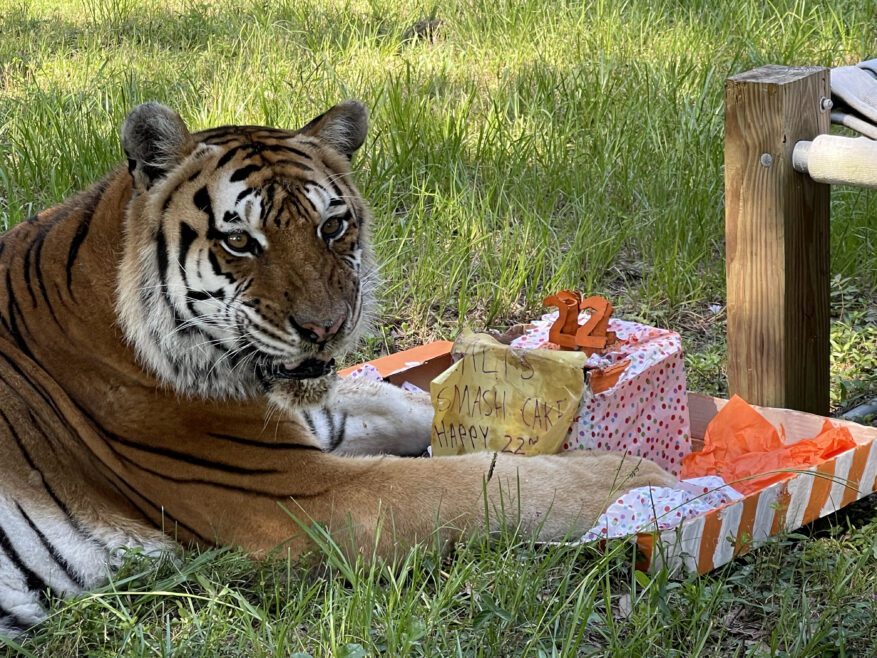 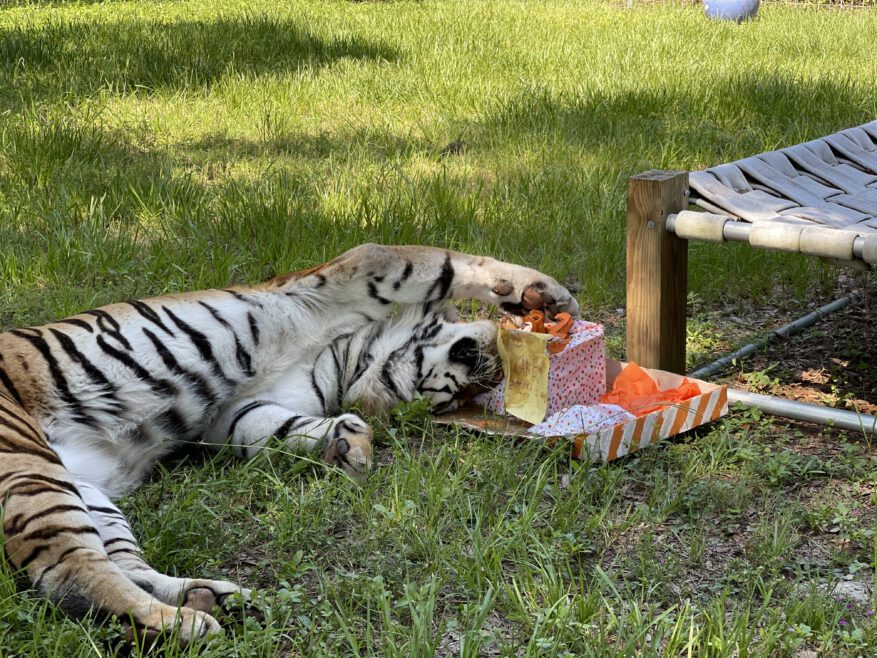 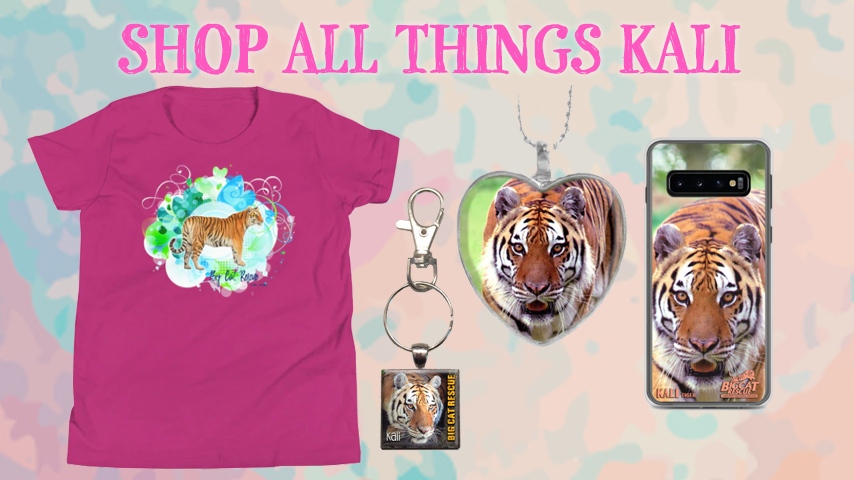