0
SHARES
925
VIEWS
Share on FacebookShare on TwitterShare via Email Moses was abandoned here at Big Cat Rescue with no note and no one to tell us what his story was. He was approximately four weeks old and near death when his carrier was discovered just inside the front gates in May of 2001. He knew how to nurse from a bottle which is something that he would have been taught over a two to three-day period. Knowing that we assume that he was someone failed attempt at having him for a pet.

Within a short period of time, with a proper diet and antibiotics, he was doing well enough to play with his friend Trick E., the Amurian Leopard Cat. Moses grew quickly and soon became too big a playmate for Trick E. though.

Moses now lives with his mate Bailey. They are both Native Florida Bobcats and are very difficult to tell apart. The key is to look at their noses! Bailey has a beautiful pink nose and Moses has a pink nose that has black speckles on it, so it tends to look darker. Moses has a very unique coloring that is a reddish brown and white markings with blue eyes.

“He is one of the prettiest bobcats!”
~Keeper Brittany Mira

“Moses appears to be the nicer of the two, but don’t let him fool ya at feeding time!”
~Keeper Brittany Mira

Moses has been neutered and Bailey has been spayed to ensure that they cannot reproduce. Big Cat Rescue has a strict policy and does not believe in breeding for life in captivity.

Moses really seems to enjoy his enrichment and spying on his keepers and tour guests from the comfort of his many hiding spots. He loves to lay down inside flower pots, hide within the lush greenery, and can often be found with his mate Bailey lounging in the foliage and grooming each other. He does really well with operant conditioning but is otherwise pretty elusive and shy unless there is food involved!

Moses bobcat gets another stick stuck in his mouth! When this happens, it is common to see the bobcat making a sort of smiley face and paw at their mouth in an effort to get it out. Will Jamie Veronica be able to remove it? Watch the link below and find out:

Moses Bobcat has a recurring issue with getting sticks stuck across the roof of his mouth. This one has damaged his teeth, so the bad teeth are coming out. The good news is that having these teeth removed will mean a stick likely won’t get stuck in there again. He has also been noted to have a swelling on his rear paw, so Dr. Justin Boorstein is taking a biopsy to see what is going on.

You can watch the procedure here: Moses Has Bad Teeth Removed

Moses was recently sedated for the first time (since he was a kitten) in sixteen years. He is notorious for chewing on his plants and getting palm frond sticks stuck across the roof of his mouth. Usually we are able to get them out by using an operant stick, but this one is stuck! During his exam, we found that his upper molars on both sides had sustained damage from another stick some time ago as his dental disease has progressed. The stick was removed along with two upper molars on both sides and one lower molar.

This has left Moses without any chewing teeth which means that he will be on a soft food diet for the remainder of his life. Any meat that is given to him has to be cut into pieces small enough for him to swallow.

In addition to his dental issues, a mass was found on his right rear foot. A biopsy was taken and sent to the lab for testing. It has come back as Myxofibrosarcoma which is a cancerous tumor. This type of cancer has a low likelihood of spreading, but he will have surgery to remove the mass. Meanwhile, he and Bailey are back together.

16-year-old Moses Bobcat is having a cancerous tumor removed today. A biopsy was taken that shows slow-growing cancer in his rear right foot. Dr. Justin Boorstein has come in to perform the procedure.

Moses will be in the hospital a little while longer. The tissue surrounding where the mass was, did not look all that great, so we want to continue to keep an eye on it. He has an e-collar on and is doing far better than we thought he would, given his extended stay in the hospital.

Moses was sedated to have a stick removed from the roof of his mouth. He also had a couple of bad teeth removed. As we were finishing up, we noticed a lump by the pad of his paw on one of his back legs. A biopsy was taken and sent to the lab where it was discovered to be cancerous. Moses was then sedated again in an attempt to remove the mass. Upon removing the mass, the area left was rather large and so it then had to be decided how it would be closed to heal. In domestic cats, a bandage is sometimes enough, but in exotic cats, that just wont work. The decision was made to sacrifice two toes to amputation which gave us skin to properly cover and heal the wound from the mass removal.

Two days following the surgery, the bandage was removed. There was some swelling which is to be expected, but the foot itself looked great. He spent two weeks in the recovery hospital healing before going back outside to his enclosure.

A month has gone by and Moses is doing very well. Despite only having two toes on that back foot, he walks perfectly normal and without a limp.

Please visit BigCatRescue.org/amazon-smile for how to sign up and let us know you did so we can thank you. ?

You can learn more about Moses by viewing the links listed below:

Did you know you can sponsor/adopt Moses for a whole year for as little as $25.00?

If this interests you go to https://big-cat-rescue.myshopify.com/products/bobcat-sponsorship

You can find shirts, tote bags, mugs, necklaces, mousepads and so many more fun items featuring Moses in our online gift shops. Go to reach gift shop linked below and search “Moses.” Your PURRchases of Moses Bobcat Gear helps us provide for all the cats at Big Cat Rescue and work toward ending the abuse and exploitation of big cats. 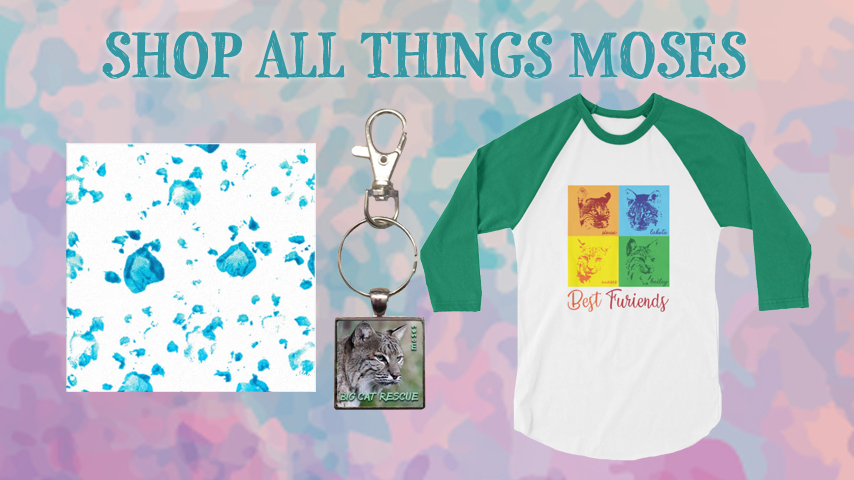