Sheena’s owner was unwilling to meet the standards required to keep her so she was surrendered to the state of Ohio. Will you help Sheena? http://big-cat-rescue.myshopify.com/collections/sponsor-a-cat In 2003 John Babb of Berea, Kentucky shipped an 8 week old serval kitten to a woman in Ohio, who named her Sheena. (The breeder’s website boasts that he is still selling serval kittens to pet owners in the U.S. for $6,000 and abroad for $9,000.)

After Terry Thompson released 56 lions, tigers and bears in OH the state decided to ban the private possession of big cats, but grandfathered in the existing animals as long as the owners would build a safe cage, register the animal and provide insurance or a bond, in case their animal escaped and hurt someone.

Sheena’s owner was willing to register her, and apparently kept her in a dog run, but was unwilling to provide insurance. She decided instead to turn Sheena over to the state of OH.

To our knowledge she is the first exotic cat to be surrendered to the Ohio authorities. The ban became law in 2012 and the exotic pet exploiters predicted that hundreds or thousands of big cats would be dumped on the state, but that hasn’t happened.

People who really love their animals will do the minimal things asked of them by law to keep them. Sheena wasn’t that lucky…

Or maybe she was even luckier because when the state of OH called and asked if we would provide a permanent home for her we knew that YOU would help us do that. Please let Sheena know that she is loved and welcome at Big Cat Rescue by donating to her care. Sheena Serval arrives at the airport. Sheena Serval arrives with attitude intact.  (Thanks for that observation Kiz) She’s late so it is the middle of the night, but Big Cat Rescuers won’t leave until she is safely loaded and on her way to her forever home at Big Cat Rescue. Since it is midnight, Sheena will spend the night in the Cat Hospital and be released as soon as it is daylight. We weigh her in the carrier and then will weigh the carrier after her release into her new Cat-a-Tat to get a good weight on her. Sheena Serval inside for observations

Sheena Serval didn’t want to eat this morning and didn’t want to walk without prodding. The vet team decided to bring her into the Recovery Hospital to watch her more closely and Dr. Justin Boorstein may come check on her later today. She weighed in at 33 pounds which is 10 pounds more than her last weight. She’s fed twice a day to make it easier on her stomach to take the allergy meds she needs, but she looks more bloated than just some extra snacks.

Sheena was taken to the Humane Society of Tampa Bay today to be seen by Dr. Boorstein. We were concerned that she may have broken a bone in her foot. However that was not the case and her x-rays looked good overall. She does have three masses. One golf ball sized on her right front elbow, one golf ball sized on her right rear thigh, and the other is more of a spread out thickening of her left rear foot.  Multiple doctors took a look at her today and the consensus is it’s a weird one. Fluid samples were taken from the two ball shaped masses, and a punch biopsy was taken from the foot. She will remain indoors in the cat hospital recovering for the next few days after which she will be moved to the outdoor recovery cage. Meanwhile we will await test results from the lab.

Her biopsy and cytology results from two masses and overall swelling of her rear leg came back inconclusive. She has not been wanting to move around much in the hospital and was pickier with eating. We decided to put her back out into her enclosure to see if she was just acting this way because she was confined indoors. She will be monitored closely over the next few days for any sign of improvement. Not knowing what is going on with her if she continues to be immobile and her appetite does not improve we may have to make some tough decisions to ensure she does not suffer.

This morning Sheena serval peacefully crossed the Rainbow Bridge on her own in her enclosure. She got to spend her last day and a half outside smelling the fresh air and getting frequent visits from her neighbor Kricket.
*Sheena had been in the hospital for the past several days due to not wanting to eat or bear weight on her leg. She was found to have 3 masses that were biopsied by Dr. Boorstein but came back inconclusive. It was decided she might do better back outside and so was brought back out to her home enclosure day before yesterday.
She has been taken to the state lab to find out what caused her passing and decline in health. 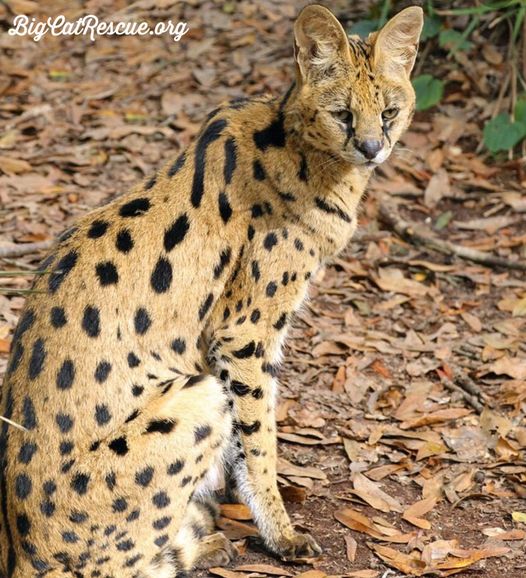