I would like to take this opportunity to offer a very relevant fact regarding all the white tigers that are currently in the U.S. About twenty-five years ago I fully researched and documented the accurate genealogy and origin of the white tiger in the U.S. That research revealed that there were and are two separate origins of white tigers. The one that has received all the attention is the Indian or Bengal tiger bloodline which originated in India and entered the U.S. via a breeding loan to the National Zoo. One of the Indian origin tigers carrying the recessive gene for the white color was the mother of the second litter of white tigers born at the Cincinnati Zoo in 1976.

What is not known, because I have never published my research definitively showing the true origin of the white tiger in the U.S., is that there is a second and separate origin of the white tiger which occurred spontaneously in two separate private collections in this country when both owners inbred brothers to sisters that were all offspring of two litters resulting from crossing a pure Siberian male and a Bengal female at a small zoo in South Dakota.

Of the twelve live cubs born to the Siberian male and Bengal female at that small zoo, one of the private individuals purchased a litter of two cubs, a brother and sister, and the other individual purchased another litter of five cubs, brothers and sisters, through an animal dealer. Both individuals inbred their brothers and sisters and spontaneously had white tiger cubs born. One white male crossbred tiger, half-Siberian and half-Bengal, was placed on loan to the Cincinnati Zoo where he was crossed with a white carrier female Bengal tiger on loan from the National Zoo. That hybrid crossing in 1976 of the two separate white tiger origin bloodlines produced a litter of four white tiger cubs and one normal colored white carrier cub.

“the Zoo proceeded to repeatedly inbreed… the white male to his white female sister… Thus, every white tiger ever born at the Cincinnati Zoo is part Siberian tiger and part Bengal tiger… It is those offspring which have been disseminated throughout the U.S.”

The Cincinnati Zoo then returned both parents and three of the cubs to the two exhibitors that had placed their adults there on loan and then the Zoo proceeded to repeatedly inbreed back and forth the white male to his white female sister that the Zoo had retained ownership of for themselves. Thus, every white tiger ever born at the Cincinnati Zoo was and is part Siberian tiger and part Bengal tiger to a greater or lesser degree.

It is those offspring which have been disseminated throughout the U.S. One of the individuals who owned the litter of five brothers and sisters representing the American crossbred white tiger bloodline has continued to inbreed his tigers for over the past twenty-five years even though his neonate mortality rate has often exceeded eighty per cent and his tigers are severely defective and unfit.
By pure chance and against overwhelming odds, when the two separate bloodlines, the Indian and American, were crossed for the first and only time at the Cincinnati Zoo, the offspring were fairly thrifty and of normal birth weight.

Interestingly, anyone with even cursory experience with and knowledge of the five remaining and endangered subspecies of tigers should be able to simply look at the white tigers throughout the U.S. and clearly see the phenotypic Siberian characteristics present in the cats. Some weigh up to seven hundred pounds and most clearly resemble and exhibit Siberian tiger physical characteristics.

The only conceivable legitimate reason for exhibiting a white tiger would be for educational purposes to clearly and unequivocally illustrate to the public the process of natural selection and how, when a deleterious recessive genetic mutation randomly occurs that is disadvantageous for the survival of the animal, such as white color in a tropical jungle environment, the animal does not survive to pass on that genetic mutation or disadvantageous characteristic to its offspring.

This was the normal course of natural selection and evolution of the tiger until a young white tiger male was captured in 1951, raised and then inbred to one of his daughters by a Maharajah in India who had captured him. Then, in the early 1970’s, the recessive genetic mutation for the white color was present in both the male Siberian tiger and the female Bengal tiger that were exhibited and bred at the small zoo in South Dakota resulting in the origin of the American white tiger bloodline. 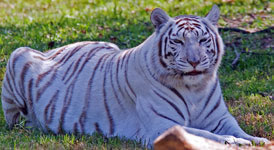 To quote from Dr. Ron Tilson, Conservation Director of the Minnesota Zoo, “The white tiger controversy among zoos is a small part ethics and a large part economics. The tiger Species Survival Plan has condemned breeding white tigers because of their mixed ancestry, most have been hybridized with other subspecies and are of unknown lineage, and because they serve no conservation purpose. Owners of white tigers say they are popular exhibit animals and increase zoo attendance and revenues as well. The same rationalization can be applied to the selective propagation of white lions, king cheetahs and other phenotypically aberrant animals.”

“However, there is an unspoken issue that shames the very integrity of zoos, their alleged conservation programs and their message to the visiting public. To produce white tigers or any other phenotypic curiosity, directors of zoos and other facilities must continuously inbreed father to daughter and father to granddaughter and so on. At issue is a contradiction of fundamental genetic principles upon which all Species Survival Plans for endangered species in captivity are based.
White tigers are an aberration artificially bred and proliferated by some zoos, private breeders and a few circuses who do so for economic rather than conservation reasons.”

Dr. Tilson made these comments before I informed him that all the white tigers in the U.S. are crossbred or hybrid animals, part Siberian and part Bengal.  So, in conclusion, every white tiger in the U.S. is not only the result of repeated inbreeding of genetically defective animals but, even worse,
is a hybrid or crossbred animal. Thus, anyone involved in breeding and/or exhibiting white tigers is doing a great disservice to honest conservation and preservation efforts to save the five remaining and endangered subspecies of tigers barely clinging to survival in their rapidly diminishing natural habitats.

The genealogical misrepresentation, repeated inbreeding, exhibition and sale, for $60,000 each, of white tigers by the Cincinnati Zoo initiated the greatest conservation deception of the American public in history. That deception continues through today. In my view, exhibiting and breeding white tigers is the very antithesis of conservation, is dishonest and unethical and is tantamount to catering to the public’s desire to see genetic aberrations rather than educating the public regarding the incredible process of natural selection, how the unbelievable diversity of life has evolved on our planet throughout the past 50 million years and the crucial need for us to preserve natural habitats and stop the destruction of our global ecosystem if we desire to save any threatened or endangered species from extinction.

I hope this information helps inform visitors to your website.

Note: Dr. Laughlin is widely recognized internationally for his expertise in the care and management of zoological animals, especially zoological cats and elephants. He has an international consulting practice limited to zoological animals and when he completed his research into the accurate genealogy of the white tiger he had well over 250 tigers in his practice alone. He also completed a landmark four-year study in the 1970’s determining the efficacy, dosage and safety of a modified-live trivalent FVRC-P vaccine for use on zoological cats. That study included 224 zoological cats representing 19 different species and the results of that vaccination study have saved the lives of thousands of captive zoological cats.

Dr. Laughlin has graciously agreed to be a Consultant for the care and management of our extensive collection of zoological cats at “Big Cat Rescue.”  Dated approximately 1997-1998.

One response to “The White Tiger Fraud”