0
SHARES
4.1k
VIEWS
Share on FacebookShare on TwitterShare via Email

Is this you? Volunteer now!

We get dozens of letters every day from people who tell us it has been their life long  ambition to work with animals.

Most of these people are hoping to get a paying job where they can work with our big cats or advice on how they can get a paying position at a zoo.

We have a volunteer staff of about 100 people,  and can house up to 15 interns, as do most sanctuaries, because there is NO money in the rescue business.  Even people who have volunteered with exotic animals for many years find themselves on waiting lists for those zoo jobs behind people who have been in line a lot longer.

We only have a tiny paid staff managing volunteers and working on the administrative side of things.
If we could afford to pay salaries we couldn’t accommodate all of the people who want to be here.

Sometimes we have openings for on site interns.

Your lodging will be provided on site, and a small allowance for food, but you will need to have your own funds for transportation around town.  Check out the page about internships.

You can volunteer from where you live as an AdvoCat.  Find out other ways to volunteer at http://bigcatrescue.org/get-involved/

To better prepare you for a paying position in a zoo we have built a do it yourself course for Zoo Keeper Training and Standard Operating Procedures. Find it at ZooCollege.com

There are a lot of shams out there that will charge you to be “trained as an animal handler” but you won’t find a paying job with the certificates they offer.  Any place with money enough to pay a keeper will turn away people that have been so foolish as to pay for the privilege of bottle feeding babies or learning to handle big cats.  These places breed baby lions and tigers so that people who do not know anything about the industry will pay them to come handle the babies.  They claim to be breeding for conservation, but none of them are involved in the Species Survival Plans which are only participated in by AZA accredited zoos.  If you knew that paying them for your bogus certificate would only mean that more and more unfortunate exotic cats would be bred for lives of deprivation and confinement, then you wouldn’t support them.

It is such an enormous problem across the U.S. that there is currently legislation being promoted that would make contact with these babies illegal in order to stop the abuse. 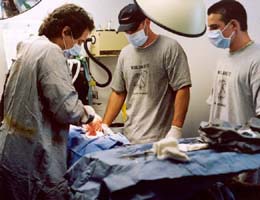 If you want to work with animals we suggest that you find a career that pays well and affords you the flexibility you need so that you can afford to donate your time to what you love.

If you really want to help the animals the smart thing to do is to get involved in politics. You don’t have to be a Senator to get better laws passed. All you have to do is talk to one. Big Cat Rescue makes it easy for you to contact your representatives in congress and in the media to educate them about the plight of the animals. You can make a difference by speaking out for the voiceless. Speak out NOW!

When is neutering a cat a multi-cultural event that illustrates the dawning of the golden age of enlightenment? When the patient is a lion, saved from a terrible fate in a road side zoo, by Big Cat Rescue and the doctors and assistants span several continents. What makes this a notable landmark in the change of perception is the fact that the dawn of the golden age, according to Mayan calendars, began in June of this year and will continue through the year 2012. During this time, it is predicted that mankind will become more enlightened. We will begin to reflect on the practices that we have always accepted, without much conscious thought, and start to challenge their sustainability and their role in our lives.

Cameron the lion was born in a roadside zoo and circus and paired up with a white tigress cub. They were purposefully raised together by the proprietor with the intent of bonding them so that they would mate as adults and produce white Liger cubs that they could charge people a lot of money to see and buy. Some loopholes in the law do not recognize hybrids as wild animals requiring permits, so they could circumvent the law and increase their number of potential buyers. Cameron and Zabu grew up together. They loved each other. They didn’t have the choice of being with their own kind or growing up wild and free.

Something the zoo wasn’t counting on was that people are getting smarter. Information is more readily available about the horrors of breeding white tigers and all of the deformities that go along with this practice that relies heavily on inbreeding. More people are starting to think about animals and the studies are showing that they feel pain and know fear and can communicate in our language in many cases. How many of us can speak theirs? People are starting to ask where last year’s babies that drew in all of the crowds are this year. People are seeing animals as sentient creatures and wondering what ever gave us the right to lock them in cages and gawk at them.

Enough people are waking up, that this little zoo and circus sideshow couldn’t support the owner anymore. The animals were given away and many still cannot find homes because the zoos don’t want them, the real sanctuaries (those that don’t breed animals) are full and those that do breed are finding less and less of a market for their unfortunate cubs. Cameron and Zabu were two of the lucky ones that found their way to Big Cat Rescue.

The dilemma was how to house them. Cameron has been pining after Zabu. He just can’t take his eyes off her. They sleep nose to nose at the fence, but a fence separates them at Big Cat Rescue because “accidental” births are just as loathsome an event when you don’t believe that any big cat should be born for life in captivity. All of the cats rescued from that zoo were starving and in very poor condition. Cameron was too thin and too weak to survive a vasectomy when he arrived. It would take time to build up his strength. So they waited, and they waited…

On August the 18 th the long awaited day arrived. Along with it arrived Big Cat Rescue’s veterinarian, Dr. Stacie Wadsworth, DVM of Carrollwood Cats. Assisting her was volunteer vet Dr. Liz Wynn and vet student interns named Diana from Brazil and Trevor who is studying to be a vet in Gainesville. Anesthetizing a full grown lion is no simple matter and in the summer Florida heat it is particularly dangerous. The plan was for operations manager Scott Lope and VP Daniel Capiro to coax him into a small lock down area where he could get the injection.

Then, once asleep, with the assistance of Diana, Trevor, Anissa, Kathryn and the vets he would be lifted into a rolling transport cage. A golf cart would have to suffice as the towing vehicle, since our three wheeler had been stolen, and the golf cart and circus wagon convoy would cross the sanctuary grounds to the onsite cat hospital donated by Dr. John and Sherrod West and Richard and Debbie Boensch. President Jamie Veronica would capture the entire event on film as a training aid and to enable everyone to see what is involved in big cat care.

Once inside the cat hospital Dr. Stacie Wadsworth began the vasectomy. A simple neuter would not be appropriate because it would cause Cameron to lose his handsome mane and cause Zabu considerable frustration. Dr. Wynn used the opportunity to clean Cameron’s teeth, run blood and urine tests and give him an overall exam that is hard to do when he isn’t sleeping so soundly.

The vet student Diana got the opportunity to monitor Cameron’s heart and breathing. Scott tried to make a gas mask from a bungee cord container that would be big enough to fit over Cameron’s massive face but it didn’t fit the lion’s face snugly enough, so he had to be intubated and the hose held in place. Daniel held a flashlight to enhance the hospital’s overhead lighting in the surgery area.

When Cameron began to growl it was time to finish up and the vets got out of the transport cage that had become the surgery table. Antibiotics and IV fluids were given as the lion was wheeled all the way in to the hospital and the doors closed to keep him cool. He was monitored for the next 24 hours and then released into his new 3 acre cat-a-tat.

Once the active sperm have died Zabu will be transferred to this new enclosure where they can live happily ever after.

The dawn of the Golden Age is upon us. Are you awake yet?

8 responses to “Work With Big Cats”