0
SHARES
5.3k
VIEWS
Share on FacebookShare on TwitterShare via Email

Aria Tiger is a perfect example of why we need the Big Cat Public Safety Act to pass Congress this year!  Aria was most likely the cast off from a cub petting scheme that ended up in the backyard of a private owner who was not subject to any federal oversight by USDA, and who refused for years to comply with rules made at the state level requiring private owners to provide proper vet care.  Aria suffered the horrific injuries you see below in silence for over four years. 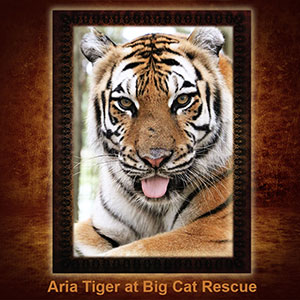 This has to stop!  You can make it stop by contacting your member of Congress at the link above every week until they call the bill up for a hearing on the floor.  We already have enough co-sponsors for the bill to pass, if it can just get a hearing. Maybe I was wrong?  On September 7th, 2019 when I’d sent our rescue team, led by Jamie Veronica, to pick up Tika the tiger from the Ohio Department of Ag, I knew they said the tiger had been suffering for four years with open wounds.  When it looked like the tiger would surely die, ODA seized her and took her to their exotic holding facility; a multi million dollar warehouse that had been built to deal with the aftermath of banning the possession of big cats in Ohio.

I think the vet team there probably wondered if she could be saved, but you don’t have to spend much time with this amazing cat to know she’s worth saving.  When I first saw her though, I wondered if maybe the kindest thing to do would be to put her out of her misery.  I thought maybe I had overestimated our ability to fix any broken cat. Her former owner, Cinda, had kept her in such a small space that years of urine soaking into the earth had compacted it into something as hard as concrete and yet impossible to clean.  She had named the tiger Tika.  Given the poor diet and lack of vet care, Tiki’s dull coat hung loosely over a gaunt frame.  The pressure points of both her shoulders and both her hips were huge gaping holes into her body.  The skin had died and had pulled away from the underlying muscle (what there was of it) with gaps you could slip both hands into.  Imagine pants with long, wide rips in them.  Her bone and thin muscle cover could be seen moving underneath the gaps in her skin when she walked.  When she stood still you could see the raw flesh drip blood tinged pus. Officials at the Ohio Department of Agriculture said they had been warning Cinda for years to have the cat treated and give her better living conditions.  Cinda would try antibiotics for a while, but never finished out the course, or used the wrong types, so over the years Tika had built up a resistance to most common antibiotics.  ODA had warned me that sending her to us was a last ditch effort and that they wouldn’t be surprised at all if our vet took one look at her and said we need to let her go.

Even knowing that, it did not prepare me for the horrific sight of seeing Tika, who our crew had renamed Aria on the trip to Tampa.  (Aria was Game of Thrones character played by Maisie Williams, who had visited here during ComiCon)  Aria Tiger would be in “witness protection” here, so she had to have a new name and we are not allowed to tell her story publicly until the state gains legal ownership of her and transfers that to us.  The last witness protection cats (Dutchess, Jasmine, Sapphire and Jinx) took four years to make it through the legal process. Aria also had a mouth full of broken teeth and yet despite being so badly treated and being in what must have been just unendurable pain, she chuffs sweetly at everyone.  She loved the new food she got here and Dr. Justin Boorstein did surgery to cut away all of the dead flesh and sew up her up.  He remarked that her bones were just a few millimeters under what was left of the muscle covering them.  Another few weeks and the bones would have cut through her muscle and gaping skin and that kind of potential infection would have surely killed her. Aria’s form began to fill out and her coat became soft and glossy, but because she had built a resistance to antibiotics, we were having a hard time finding ones that would work to help her heal from the inside out.  Unlike her former home, Aria was getting her meds, as prescribed, twice a day and her wounds were being sprayed with a topical agent, but even though we had sent the biopsies out to determine appropriate antibiotics, they weren’t working. The skin around the pressure points couldn’t heal and the stitches began to fail as her hide decayed and tore away from them.  We had to keep her on concrete because even hay or straw would have created a path into the holes with bacteria that would exacerbate the situation.  She had a platform of wood and her cage was kept spotlessly clean by her many daily attendants, but it just wasn’t enough.  More cultures were done, and medications were adjusted, but Dr. Justin had to sedate Aria again and cut away dead flesh to sew together living tissue.  This time he installed drains in the hips, as they were the worst. That lasted a few days before she ripped them out.  If this stitching didn’t hold, there would be no other options as her skin was pulled tightly to cover the huge holes. By mid October the shoulder wounds were closing, but the hips just could not heal because of the hard surface of her hospital cage.  The gaps were still too open and oozy for her to go on earth or straw.  We had tried early on to give her heavy rubber mats, like you see on the floor of surgery suites for the doctors to stand on, but she shredded them and we were afraid if she ingested pieces we’d be doing more surgery.  Jamie puzzled over it long and hard and came up with a rather spectacular solution. Jamie and Victor cut heavy duty four inch thick foam to fill the floor of her cage and then covered it with thick rubber horse stall mat material.  (Aria shredded the vinyl flooring option so it had to be redone)  The key to making this work was that they had to screw a board down across every seam, so that Aria couldn’t pull it up by tooth or claw.  Kathryn Stapleton and Afton Tasler were diligent in making sure that Aria got all of her medications, including the one, every night at 11pm, even though it meant setting an alarm to wake up and come back in to care for her.  Jamie and Victor provided that soft surface Aria needed to finally make a sharp turn toward recovery. Thankfully we had built the roof over between the two hospitals that provided an added layer of shade to the hospital cage, but we had been seeing days in the high nineties so we had two portable air conditioners and a fan running on Aria most of the time.  Yesterday Dr. Boorstein cleared Aria to go to a regular cage.  Her wounds have scabbed over and our staff has been working for days to clear and remodel 5 adjoining tiger cages for her on Tiger Island.  We needed a cage with no high platforms and no ponds for her next few months of healing. All of the staff and volunteers who were on site Monday gathered to escort her to her new place.  She’d be given three of the 1800 sf cages today and more later as they were finished with the renovations.  Aria’s first steps onto the bright green, soft winter rye grass were as expected.  Tigers who have never known such a sensation take high, cautious steps until they figure out that the softness won’t totally collapse beneath them.  She wandered cage to cage to be sure there wasn’t a way out and then came back to where her vet and caregivers were to roll in the grass beside them, chuffing wildly and rubbing up against the side wall in appreciation. I’m sad that she can’t go free but I know this is the second best option for her.  I’m glad we didn’t give up and, more importantly, that she never gave up.  She is an inspiration.  If she can remain upbeat and kind despite all she’s been through then we should take note.  This week holds promise of being even better come Friday. – end of diary entry

A huge shout out the Kathryn and Afton for the daily injections that had to be given around the clock during Aria’s convalescence.  Both of our vets, Dr. Justin Boorstein and Dr. Liz Wynn worked miracles to save her life and a big round of thanks goes out to Dr. Gingerich for fixing her teeth so that she’s no longer in pain.

Tears of joy streamed down our faces today as the official transfer of Tika (who we have renamed Aria) the tigress, was released into Big Cat Rescue’s permanent custody.  Today is the first day that we can publicly talk about her and include her in our photos, videos and LIVE posts to social sites.  Despite all she’s endured at the hands of humans, she is such a gentle soul and so appreciative of every kindness shown to her.  She has four Cat-a-tats nexts to Amanda Tiger’s 4 Cat-a-tats and they can often be seen laying as close as two tigers can, separated only by a narrow walkway.  They really seem to enjoy each other’s company, but we do not plan to introduce them because tigers who really enjoy being around each other, still will often fight if allowed in the same space.  These tigers have been through enough already without being subjected to that.

Rescue video coming soon.  Be sure to subscribe to us at BigCatTV.com and Facebook.com/BigCatRescue