0
SHARES
4.1k
VIEWS
Share on FacebookShare on TwitterShare via Email

On Beacher’s 5th birthday his owner gave him the gift of his freedom…well, the most freedom he can have anyway, as an F1 Savannah Cat. Beacher had been purchased as a 7 week old kitten from the Drinkwater cattery in Pasco County, FL who held themselves out to be “responsible breeders.”  The owner really did her homework first.  She researched everything she could find on hybrids and Savannah Cats.  She visited Big Cat Rescue and said, despite the fact that we told her and everyone else on the tour how hybrids never work out, long term as pets, she felt that she could do it.  She had the money, the resources and the time to be with the cat all day, every day.

She paid $15,000 for Beacher and built him an indoor / outdoor room with koi pond that cost her over $10,000 just to ensure they would have everything necessary to live the dream.  She spent bonding time with him at the breeder’s facility from the time he was born, until he came home with her at the age of 7 weeks. When I asked her how old Beacher was when he first showed his true colors; as the wild cat he is, she said the very day he came home he really scared her with how aggressive he could be.

Covered in scabs from his razor sharp claws and teeth, she had him declawed on all four paws and neutered, but that didn’t help.  She said she would never declaw a cat again, but was at her wits end trying to give him a forever home in her house.  She said he never wanted to be cuddled, but would tolerate her petting him.  No one else was of any real interest to Beacher, except as prey for him to stalk and attack.

Now she was getting married and Beacher was lurking under couches and around corners to take out this interloper.  He had landed some pretty nasty bites and things were just escalating.   Beacher had managed to escape several times and each time she was worried sick he’d be hurt since he had no claws.

Today, with tears in her eyes, she brought him to Big Cat Rescue to give him what freedom she could.  With your help Beacher will have a long and happy life. He’s in the 2 x 4 wire cage for a day or two until we are sure he can’t slip through 4 x 4 wire.  Once we are sure 4 x 4 will hold him, we will open up the cage to the other section to give him much more room to run, jump, splash and hunt.

12/3/2017 – Beacher is on Recovery 3 because he got vaccinated by Dr. Justin and we are testing him in the 4 x 4 wire to see if he can get out. If he cannot escape the wire, then we will put him back outside and open access to his much larger area of 4 x 4 wire, in addition to the 2 x 4 wire section he’s been in.  He absolutely hated being kept inside.

12/8/2017 – Beacher gets a heating pad.  It doesn’t get very clod here in Florida and the cats have cozy dens but a few of the cats like to have heat, so those cats get heating pads.

12/14/2017 – Beacher has been cleared to begin getting pager enrichment such as spice bags etc.

12/15/2017 – Afton made a new video about Beacher: How is Our Newest Savannah Cat Settling In?  We took in Beacher the Savannah cat about a month ago. So how is he settling in to his new forever home at the sanctuary?

Beacher was taken to the vet clinic today after not eating for two days and acting lethargic. He has a blockage in his intestine that we hope he can pass overnight. If not, he will see the doctor again tomorrow to see if it has moved or to potentially have surgery. He will be spending the night in the recovery hospital.

Beacher went back outside today to a new enclosure that has more grass and less palms for him to eat. After fluids and medications he is doing much better. He will now be living in the enclosure next to Diablo Savannah. They have lived next door to each other in the past so we think they will enjoy catching up and being neighbors once again. 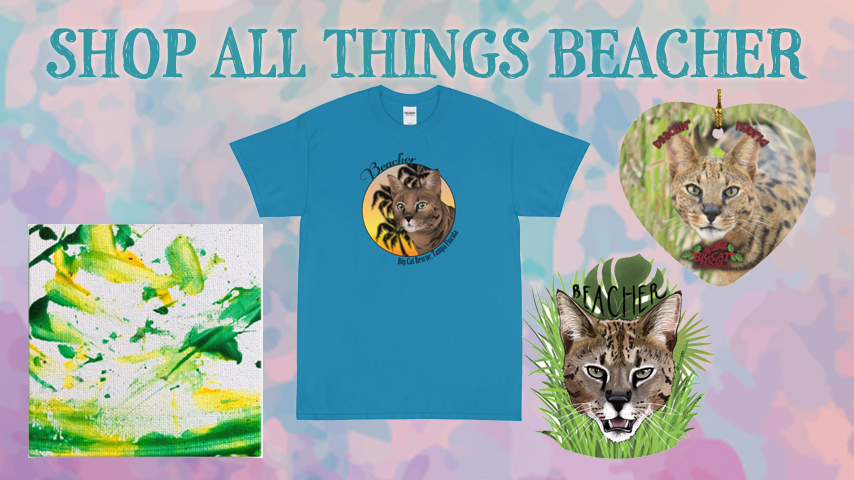