White Serval Tonga as a Cub

0
SHARES
19.5k
VIEWS
Share on FacebookShare on TwitterShare via Email

To our knowledge, only two white servals exist in the world:  Tonga and his brother Pharaoh.  The white coat is just the outward indication of the deleterious effects of inbreeding.  Tonga was 15 years old when he was diagnosed with squamous cell carcinoma. Although most arise without antecedent cause, in many species, especially in white cats, prolonged exposure to sunlight is a major predisposing factor.  Being a wild cat, Tonga lives outside, and what cat doesn’t love to nap in their favorite sunny spot?

Tonga’s adult life has been pretty uneventful from a medical perspective.  He had a bad tooth extracted in 2010 and he had an abscess treated on his leg in late 2011 but his blood work was pretty much routine for an elderly cat.  (In the wild and in most other places Servals only live to be 10 or 12, but at Big Cat Rescue they have an average lifespan of 17).

In July 2011 our Education Director Willow reported on the Veterinary Observation Chart that Tonga had a cut or scab on his nose.  It was treated and went away but then in February of 2012 Keeper Bren reported it had recurred.  It was treated with antibiotics and subsided, but recurred again in August of 2012.  Something strange was going on here and this time it looked much worse, so despite the dangers in sedating an exotic cat we decided to do a full work up on him first by Dr. Wynn at the Ehrlich Road Animal Hospital and then by Dr. Jen Coyle and Dr. Wendy Gwin at the Blue Pearl Oncology lab.

We were crushed when we heard the devastating news that it was cancer.  After many tests and a full CT scan of his nose it was determined that the only way to save Tonga’s life would be to remove his cute little pink nose.  The surgeons have to take a full centimeter extra, around the cancerous mass, in order to make sure they get all of the cancerous cells.  That will mean removing his entire nose, but the good news is that they said it should heal very well and that he will be able to live outside again once the skin has completely healed over.  He will just have higher nostrils on his face and more of a Persian profile than that of a normal Serval.  He will still be beautiful to us.

The other bit of good news is that Tonga is strong, has a healthy appetite and zest for life and the cancer does not appear to have spread into his brain or nasal cavities, so he could live another two years.  That is an average lifespan for our Servals and we feel like this surgery will give him a chance.  To leave it untreated will undoubtedly result in the spread to the rest of his body and cats are so good at masking pain that we fear he would suffer and not let us know.  The only clue we had that there was anything wrong this time was a recurring sore on his nose.

While waiting on test results and several expert opinions on what could be done we have wrestled with these options.  It will be thousands of dollars for the diagnostics we have already done and the delicate surgery that he needs.  Tonga could die during surgery.  He could have a recurrence or have the cancer manifest in other organs.

He may live a few weeks, a few months or a few years;  we just don’t know.  What we do know is that we have to try.  We hope that you agree that every life is precious and worth trying to save by helping us fund the work here and specifically Tonga’s surgery.

Tonga had three hours of surgery today at Blue Pearl to remove his cancerous nose.  Tonga is back at Big Cat Rescue, in the Cat Hospital, and will recover in there until his nose heals over sufficiently that it will not be bothered by bugs or get infected.

Tonga has since been moved to a shadier area of the sanctuary to prevent any more potential sun damage.

Six years ago on August 18th Tonga went under the knife for the life saving surgery of a nasal planectomy (removal of the nose).  Tonga had a recurring wound on the tip of his nose.  A biopsy was taken of the affected area and the results indicated it was a squamous cell carcinoma; in other words skin cancer.  He was taken to a specialized clinic nearby where a CT scan was performed to determine if Tonga was a candidate for surgery. Fortunately the doctors felt that slim margins could be taken and thus removal of the mass would be curative.  Tonga’s surgery was four years ago and he has been doing great ever since.  We are so happy that Tonga has beaten cancer and grateful for the doctors who saved his life.

8/21/18 Tonga was brought in for diagnostics because his appetite was waning.  He had a high white blood cell count and is on antibiotics, in case there is an infection, but the preliminary results indicate the cancer may be back.

8/23/18 Tonga was euthanized by Dr. Boorstein after exploratory surgery, following a lab report of cancer, .  The exploratory showed the cancer to be wrapped around his intestines, heart, stomach and liver so the only kind thing to do was to ease him over the rainbow bridge.  He’s already dressed in white.  He just needed his wings.

More About Tonga the White Serval

Tonga was born at Big Cat Rescue before we knew any better back in the 1990s.  When we first began we only had the guidance of those who bred and sold cats and believed that what they said was true. We started breeding some cats under the misguided notion that this was a way to “preserve the species.” We had not then figured out what seems so obvious to us today, that breeding for life in a cage an animal that was meant to roam free was inherently cruel. Tonga was born to parents Frosty and Nairobi, who has since been neutered and spayed.  We didn’t know it at the time, but they must have been closely related.

Tonga has a white coat and very few spots, the spots that he does have are silvery gray. Tonga is a shy cat that likes to keep to himself, except at feeding time, when he magically turns into your best friend in the whole world. Like many of the servals at Big Cat Rescue, Tonga loves enrichment involving scents. One of his all time favorite enrichment items were some pine tree cuttings. He rubbed all over these pine limbs and was soon covered in a mixture of sap and drool, his coat transformed from snowy to muddy. He made a bed underneath the pine limbs and this became his favorite napping spot for several months.

Because white footed servals and white servals are rare, people will pay to see them, so breeders will inbreed to get the defective genes that produce the un natural coat color. They cannot survive in the wild because they could not hide from predators and cannot sneak up on prey even if they did manage to survive to adulthood. They do not live where it snows. There are only a handful of white footed servals in the world and only two white servals that are known to exist. These are not albinos as they have pale blue to green eyes and some golden patches. They are born and mature approximately 20% larger than the normal colored servals. For the first year, their health is much more delicate and we have never known of white serval females to survive more than two weeks. We will not sell (although we’ve been offered $75,000.00 each) nor allow others to breed to our white servals because we do not want them to be exploited and the only way we can control that is to control their offspring. The demand for white tigers causes many of the normal colored cubs, born to these litters, to be destroyed. We will not be a part of anything that could cause the same to happen to golden colored servals. We do not breed cats, nor sell cats at Big Cat Rescue. 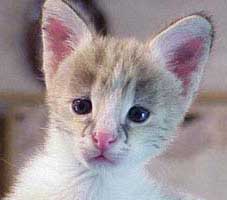 Most of our servals were rescued from people who got them as pets and were not prepared for the fact that male or female, altered or not, they all spray buckets of urine when they become adults. Some were being sold at auction where taxidermists would buy them and club them to death in the parking lot, but a few were born here in the early days when we were ignorant of the truth and were being told by the breeders and dealers that these cats should be bred for “conservation.” Once we learned that there are NO captive breeding programs that actually contribute to conservation in the wild we began neutering and spaying our cats in the mid 1990’s.  Knowing what we do about the intelligence and magnificence of these creatures we do not believe that exotic cats should be bred for lives in cages.

** How do you vaccinate wild cats without sedating them or getting bitten? http://bigcatrescue.org/today-at-big-cat-rescue-may-2/

** Photos of Tonga getting a check up: http://bigcatrescue.org/today-at-big-cat-rescue-oct-19/

** See some photos of Tonga watching a tour go by: http://bigcatrescue.org/today-at-big-cat-rescue-sept-15-2/

** This page has a photo of Tonga after he managed to turn his e-collar upside down: http://bigcatrescue.org/today-at-big-cat-rescue-nov-3/

** This page has a photo of Tonga in the cat hospital watching the Cat Sitter DVD: http://bigcatrescue.org/today-at-big-cat-rescue-aug-27-3/